Kāwhia is predominantly made up of retirees, but locals say the tiny coastal town has everything going for it. 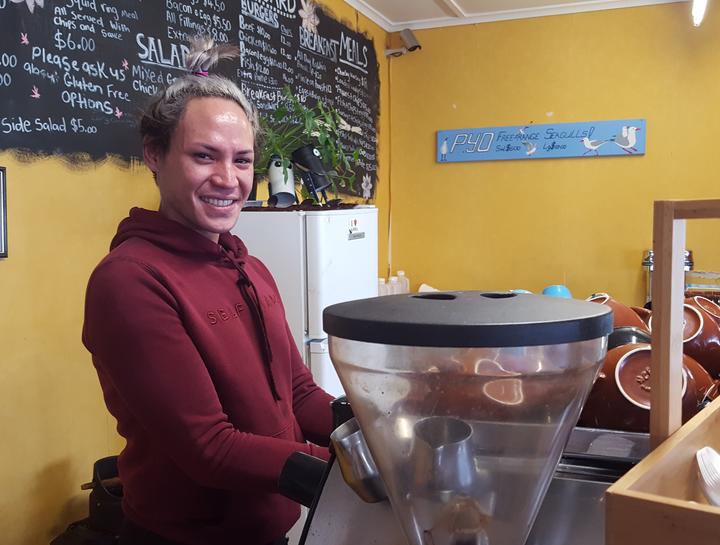 He gets to check out everyone arriving or leaving the small seaside settlement with a magnificent harbour, an hour and a half west of Hamilton.

That's because he works at the Rusty Snapper cafe where the favourite on the menu for kids is either Loaded Wedges with bacon, sour cream, sweet chilli and cheese, or Cheesey Wheezy, which is fries with cheesy mayonnaise on top.

For 24-year-old Dallas, Kāwhia is a place he's come and gone from many times in his life.

But he says it was returning this last time that he really opened his eyes.

"It just drives me back. It's the people, the place, my friends, my family, the support, and you know the encouragement,  the confidence to push you to be yourself. And to bring back what I've learnt in the big world. To show the other people in the younger generation," he says with black eyelashes flashing.

Dallas says Kāwhia is a small place (population 350) and in hard times they all come together as one big family. Any newcomers are made to feel very welcome.

"Summer was really really lovely. Kāwhia is the bestest place in summertime  because we have our traditional food festival, we have lots of the families come out to their holiday bachs. Busy busy." 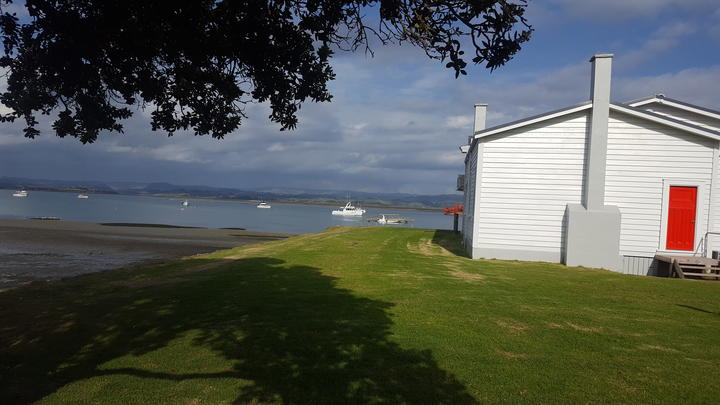 Kāwhia is the ancestral home of Tainui.

Maketu Marae on the shores of the harbour is built where the waka was hauled ashore 900 years ago.

Elder Tom Moke says there aren't too many towns in New Zealand that have had a consistent settlement for this long.

"This is where it all began for Māori. Kāwhia is a special place. It was the beginning of the people of Tainui."

The marae is the full-time home to a number of waka.

It's where people from all over New Zealand can come and learn how to navigate, how to sail. 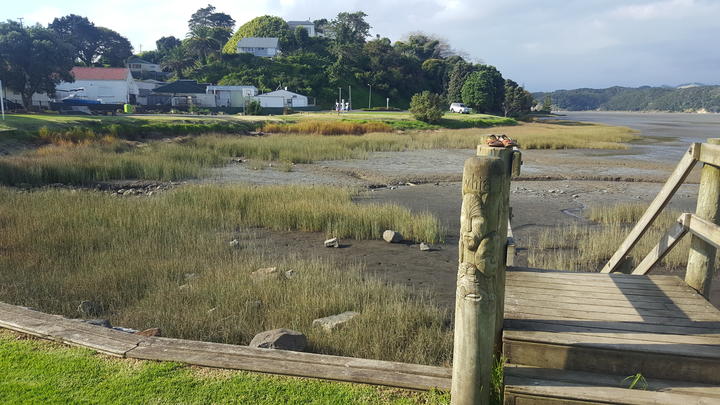 They can still sit under Tangi Te Korowhiti, the pōhutukawa where the first Tainui canoe was pulled ashore.

Tom says several years ago one of the waka sailed right through the Pacific to San Francisco, down into Mexico, before coming home.

When asked if it coped well with the high seas Tom says he wouldn't know, he didn't go.

"I said to them, the only waka I'm going on is Air New Zealand."

All locals talked to for this story were at pains to point out that Kāwhia is a wonderful place to live, it's peaceful, sure it's quiet, but they don't feel isolated. 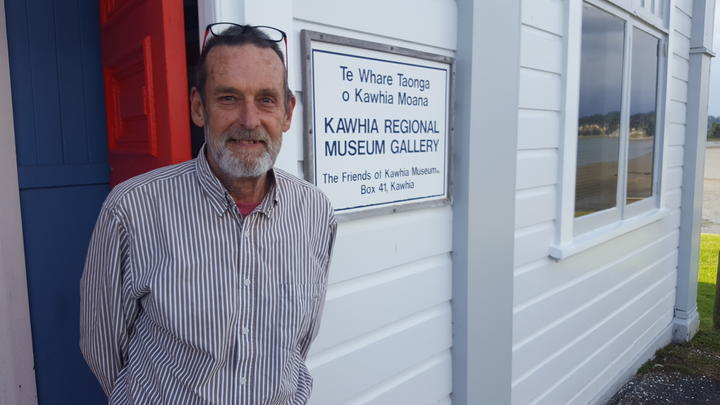 And as John Thompson a volunteer at the local museum says what's wrong with over 30 percent of the population being retirees.

"My mind says 'isn't there room in the world still for little places like this that aren't developed, that aren't going anywhere'. We're just here." 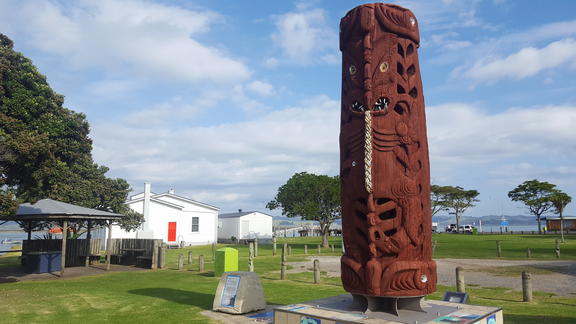 The museum is open daily in summer and five days a week in winter. Usefully it doubles as the information centre so people can come and enquire about tide times so they can dig a hot pool in the black sand beach.

It's also home to a significant fossil collection because the harbour is a Jurassic area, and there's a great collection of toki (adzes). Stone tools, all found locally.

Beside the museum in the park there's an impressive 5 metre high  Pou-Maumahara (remembrance pillar).

It was carved by Te Kuiti Stewart and is unlike any other in New Zealand.

It has two sides - Māori and European - signifying the long-standing partnership of the cultures for almost 200 years. 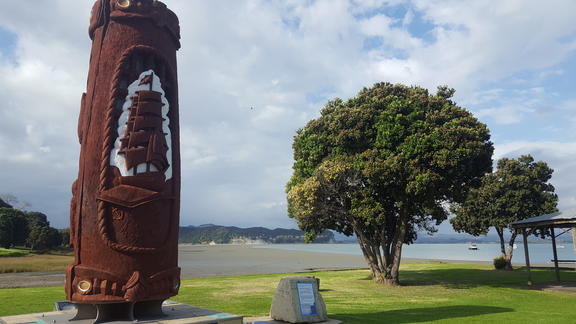 Facing east is a chief symbolising Māoridom in Waikato under the kingitanga, on the west is a carving of the Henrietta, a sailing ship that arrived with the first whalers and settlers on  New Year's day 1824.

It is shaped like a kōauau, a musical instrument blown through the nose, and at its base is plaque. 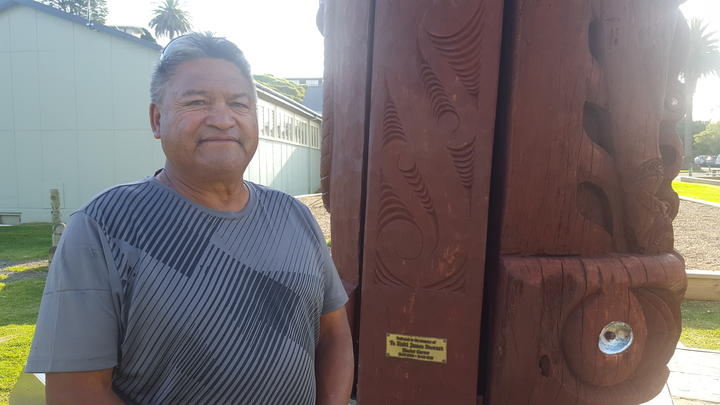 A nearby marae, Mōkai Kāinga is also a busy spot.

Beautifully cared for by Nick Tuwhangai you can see both the Kāwhia and Aotea Harbours.  These days there's just Nick and his wife to care for the place, but he's hopeful his Australian mokopuna may come to visit.

"I was saying to my wife the other day that one day I hope those fellas bring their kids home. She says 'why don't you go and visit' ... I say nah too far for me.

"Mum and I have decided we'll leave our home and that for our children, that they will always have somewhere to come back to, by the marae. To be part of this marae. 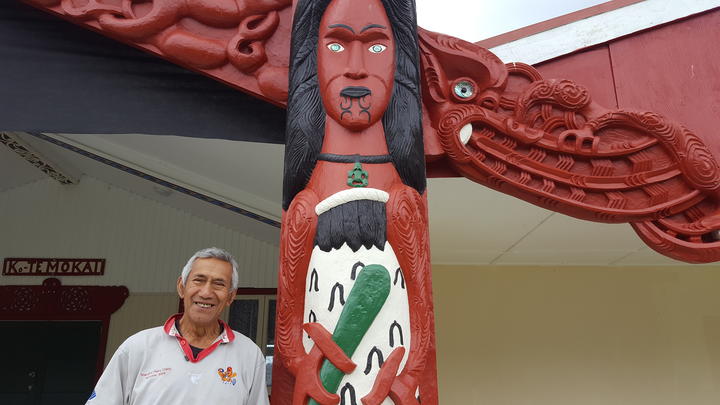 Mōkai Kāinga has two special features, the meeting house has two carvings on the front, one is Nick's great grandmother, one his grandmother.

"I said to Dad I've never seen anything so stupid as putting women on the front of a meeting house. He said 'one day Nick you'll be standing on this marae by yourself and you'll have no one to welcome visitors. Leave those women there to welcome visitors and you be the voice of those, and that's happened lot over the years'."

The other special feature is a memorial stone for ashes.

Nick says his family argued against it saying once cannibalism stopped Māori were to no longer burn flesh.

"I know what the old people said. But you know in their day if they wanted to go overseas it was just over the harbour on the other side. These days our kids wake up in the morning, hop on a plane, they end up in England. If they have an accident, if they passed away over there, can we really afford to bring them home? So I would prefer to make it easy on them, bring their ashes home and put them in there," he says.

So far there's been no emergency where it's been needed, but prior to the stone Nick says too many of their people were buried overseas.

The centre of Kāwhia is humming at present. 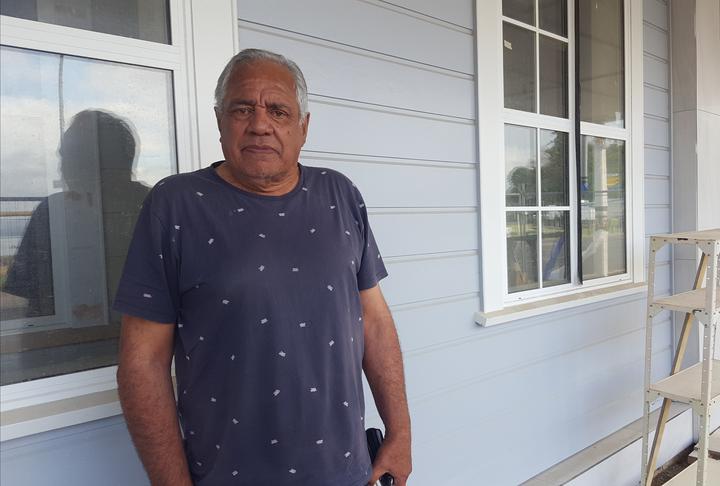 To the sound of sanders, skill saws and hammers.  The final touches are going on a large new hotel being built by Taharoa C Incorporation. Completion date: October 2021.

It's a building that, like the pou, acknowledges the rich history of the area. The Tainui canoe and two others are represented by huge triangular windows on the roof. The outer walls and rooms inside have a colonial feel.

Walking in through the front door there's a three-storey high atrium with a New Zealand cedar ceiling. 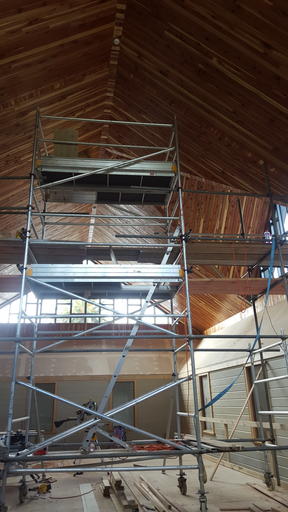 Vice-chairman of the Incorporation Tom Moke says they wanted to build something that was consistent with the town.

"It had to reflect what Kāwhia was, its history....it's to tell the story of Kāwhia," he says.

It's an ambitious project entirely done with local labour, and is the town's first new build in 50 or 60 years, Tom reckons.

Nearby the hotel is the Old Post Office Art Gallery and here about 25 artists of all different forms have work for sale.

Linda Cole-Cantwell is on the committee and says the gallery is surprisingly busy. 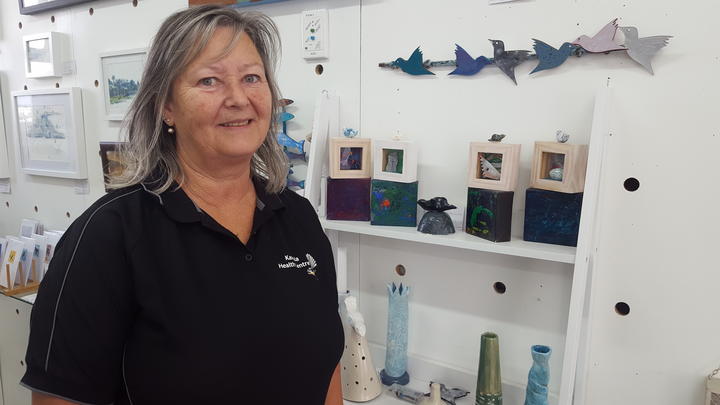 "We get a good response from visitors.  Every Labour Weekend we have a Spring Fling Arts Festival. Work then includes harakeke, stone carving, photography, quilt making.

"We're fortunate to have a retired professor of fine arts who motivates a few people.

"We're proud of our [arts] community."

Tucked in behind the art gallery - in the same building - is the Kāwhia Medical Centre.

John Burton's been the local doc for nearly 30 years now, and it's a role he loves.

"I've been told I wanted to be a doctor from the age of two," he laughs.

Being a rural GP means a blurring between family, friends and work, John says.

"It's all a plus to me. I do have to manage it. Sometimes it's not always appropriate to talk about things in the pub or general store, but I never mind."

Over the years John has hosted trainee medical students in the hopes it may open their eyes to the pleasure of rural medicine. 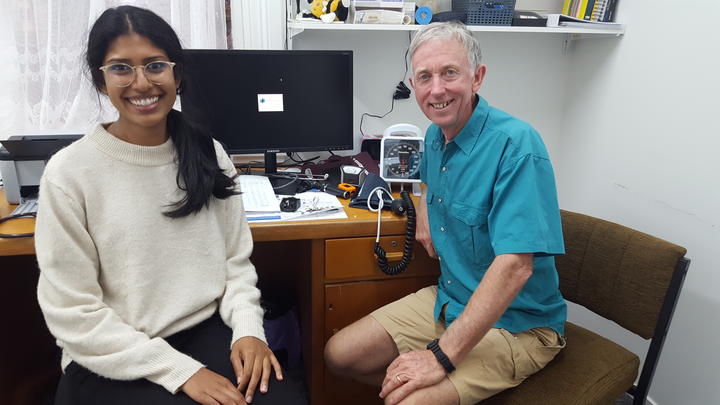 John worries that if all students know is a big hospital, they will never step out of their comfort zone.

Getting PGY2 doctors, formerly called house surgeons, out into the community has been a big focus for Dr Burton and he had to work hard to convince the district health board (DHB) to release this cheap band of workers.

Rural placements wouldn't have been "at the forefront of their mind", he says.  They have enough problems without looking any further.

"But I say look you're worrying about ED being over-loaded, and hospital beds getting overloaded. Part of the problem is there should be better primary care.

"One of my dreams has been to have both a PGY2 and a medical student here at the same time. At last this year we've achieved that. It's great having their enthusiasm and input." 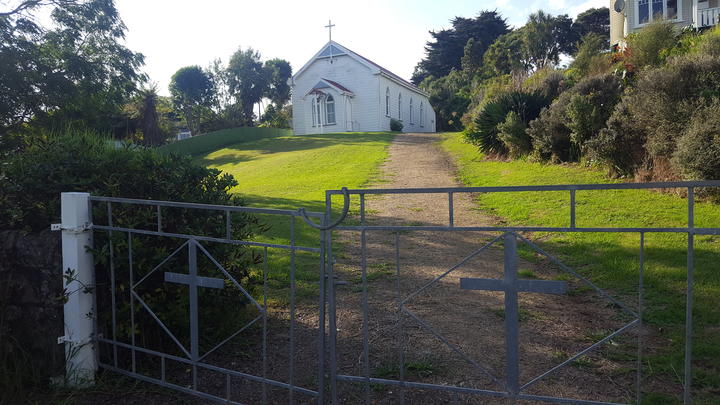 For Carissa Murugesh, the experience has been wonderful. She's helped with seniors' exercise classes, pre-diabetic meetings as well as being a GP.

"It's a huge commitment. [John], you're responsible for all our learning and managing to fit everything into the schedule, and still see your own patients", she says.

It is what is needed, Carissa says, because otherwise medical students and young hospital doctors have no idea about the opportunities to work in a fulfilling environment elsewhere.

Locals have invited Carissa to multiple dinners and she has experienced a poukai - the annual circuit of marae visits undertaken by the Māori king.