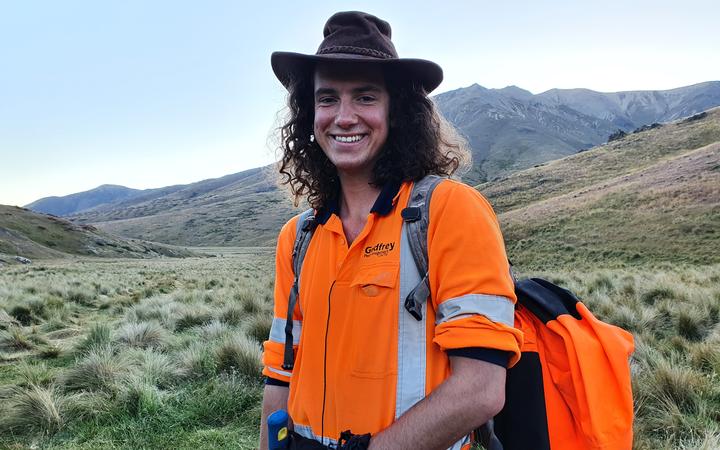 There's a war being fought on the slopes and gullies of Marlborough back country.

Among the foot soldiers are students, builders and Coast to Coast athletes - their enemy, unwanted pine trees.

Their uniform is high viz and their weapons - "blue glue" pesticide and chain saws.

In the tree control gang is Anzac Gallate, a university student with an appropriate name for the task at hand.

Over the summer when Country Life visited, he joined the fight to save 180,000 hectare Molesworth Station from wilding pine infestation, one of the biggest threats to New Zealand's largest farm.

"When you look up and see this sea of little knee high seedlings, it's a bit frustrating," Anzac said as he pulled on his gear.

It's chilly in the early morning but a 30 degree day is ahead.

The workers have to be prepared for all weathers in the high country.

Caleb Saxton, a builder from Hokitika, said he'd been working in snow recently while controlling pines at Craigieburn. 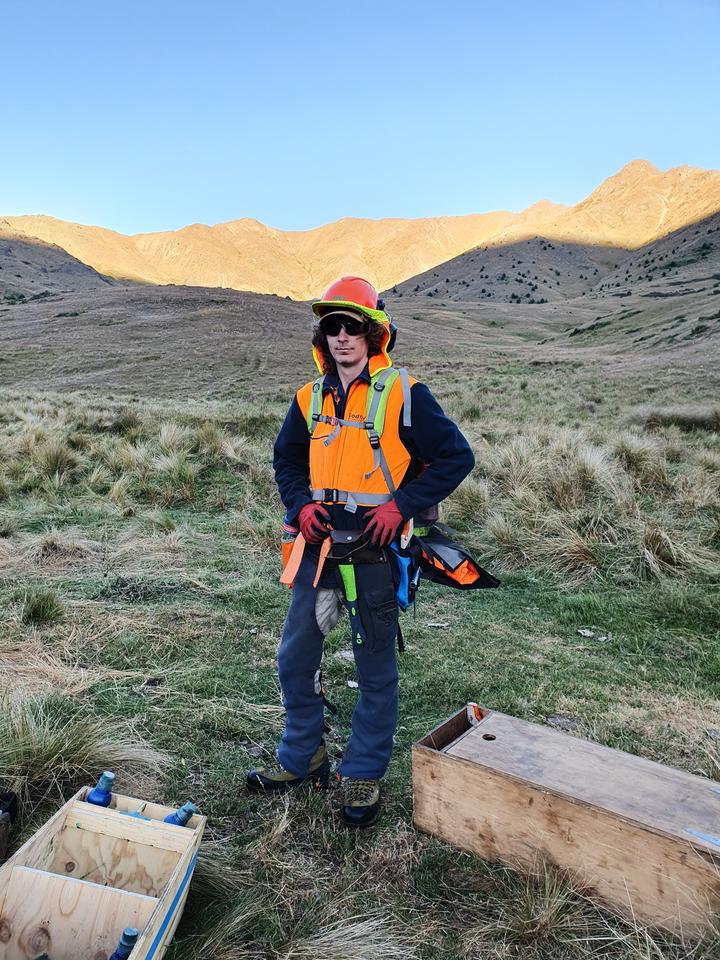 Caleb Saxton is all geared up for a day fighting wilding pines on Molesworth Photo: RNZ/Sally Round

He said working in wilding pine control crews was a good way to see the countryside.

"I'm into my shooting and hunting, so the job appealed to me."

Soon the chaotic sound of chainsaws cuts through the quiet of Molesworth.

Sometimes there's the rumble of a cattle muster in the distance, which all adds to the appeal of working on the station.

"It's beautiful to be out here in such an incredible environment that not a lot of people get to see," Anzac said.

"It's cool to be chopping pines and you look up and see the rustlers moving cattle through the valley.

Jackson Lomas, who is here after losing his job as a guide in Australia, said it was the best paid job he had had in New Zealand at $27 an hour. They work eleven hour days and are in remote areas for most of the time.

"You can't be a quitter. You can't be soft. You have to be prepared to put in hard yards," he said, pulling on his gaiters to keep the sawdust out of his boots.

"As long as you're willing to work hard it's an industry that's going to need a heck of a lot more labour in the coming years."

Boffa Miskell has the contract for pine management on Molesworth and the co-ordinator of the project Sian Reynolds said the station is divided into six operational areas.

The Alma-Tarndale block, where the gang's working today, is one of the most densely infested.

"Scotts pine, pinus sylvestris, is our worst wilding here. The seeds are quite light so they're easily carried by the wind." 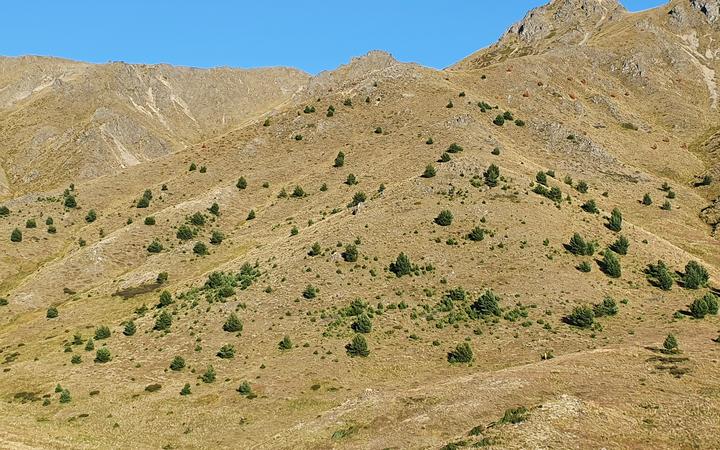 The pines are the remnants of plantings in the 1940s.

They are trying to move the infestation up towards the densest area.

"The more we can get on top of those outlying infestations, the less chance they have of spreading further afield."

As Molesworth is a hotspot for many endemic species, including fauna like the skink, there is a lot at stake.

She said the hope was to see more beech take hold and allow the natural rolling tussock land to flourish.

"Everything out here is really slow growing so anything that we try and restore out here is going to be a good 20 to 50 year time frame. Probably I won't see it which is quite bizarre to think."

The threat of invasion from beyond the station's fenceline is ever present.

It is estimated one area beyond the northwest boundary of Molesworth would take $50 million to control, Sian said.

Many areas in the Molesworth Management Unit are surveyed and maintained through the use of ABBA (Aerial Basal Bark Application) - a helicopter with a pilot and a wand operator.

"This is by far the most cost efficient way of controlling sparsely infested wilding conifers in remote landscapes," she said. 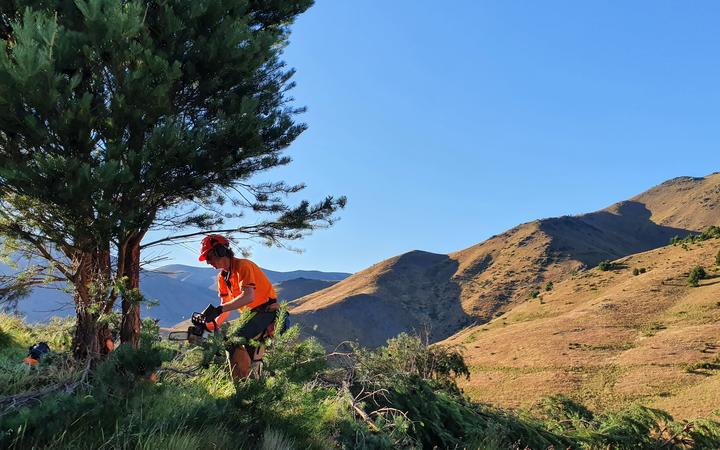 Nationwide, the fight against wilding pines stepped up significantly last year - $100 million is being poured in over four years - 5 percent of that going to the Marlborough and Tasman regions.

The trees have been spreading at the rate of 5 percent a year and it is estimated a fifth of New Zealand would be covered within 20 years if there was no control like that being done on Molesworth.

Sian Reynolds said they had managed to control about 10 percent of the station's infestation over the past two years.

Spray drones are coming on to the market too, which could boost the fight further.

Jackson said he felt like they were making headway when they were at work on the hills.

"Then when I go for drives or hikes or hunts, no.

"You see the rest of the countryside and it's just pretty depressing.

"Whenever we're on a station ... 20 guys can rip through a massive amount of area in a pretty short amount of time but then you have to pull back and the bigger picture is unfortunately very big."

"It's something I'm proud to be a part of ... I tell people I'm in conservation forestry, not forestry." 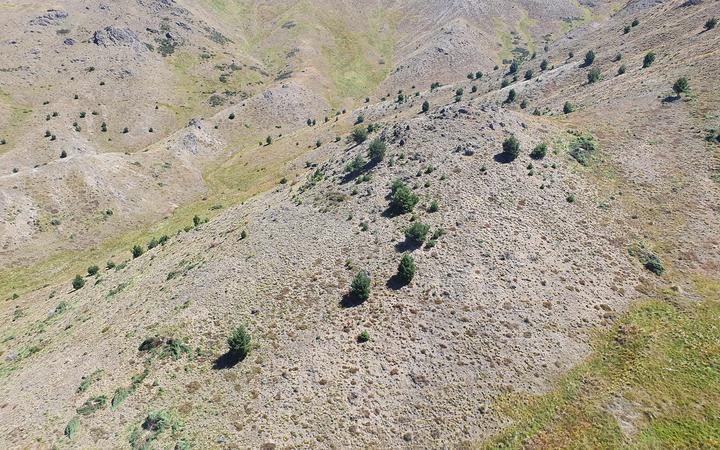