Off the Grid and in the Wild

Levi Harrison has answered the call of nature. The modern hunter-gatherer lives in the bush in Golden Bay with his partner Annika Korsten. They practice primitive living and are not only surviving, but thriving in the outdoors. 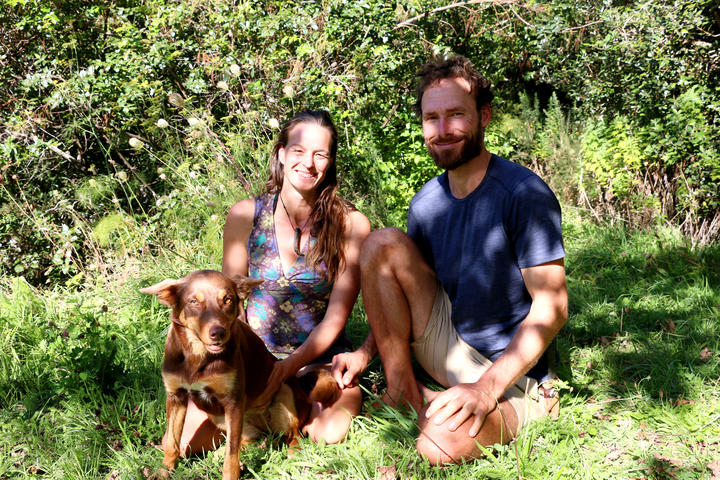 Not wanting to give away the location of their encampment, Cosmo Kentish-Barnes meets the couple beside a creek in the bush overlooking an isolated bay.

While they are chatting, Annika skins a possum Levi had shot the night before with his crossbow. They eat possum meat. She says you can cook it in the same way as Coq au Vin stew.

"You might want to add red wine, some spices, herbs that you can find, tomatoes, potatoes and then slow cook that for three to six hours."

Levi has been living wild in the bush for over three years. First in a teepee and now in a tent with Annika and her dog.

"For me living on the ground, in the dirt, it feeds something in me," he says.

They have given up most modern-day comforts. They forage for edible foods, hunt for meat and fish, shower in the creek and sleep on a bed Levi made out of Mamaku bark and twigs, topped with two woollen blankets.

"With Annika moving in we added a bit of straw so it was a bit more comfortable!"

As well as foraging for edible plants throughout the year, Annika has her own veggie plot.

"I'm noting in myself that I'm steering away from it a bit because there's so much of an abundance around me … but I do grow some treats that don't normally grow in the wild."

Despite their independence, Levi and Annika also work part-time. They have expenses like running a car, but their earthy lifestyle gives them a sense of freedom they cherish.

"It feels really natural. It's hard talking about it because this is our life, this is how we do it every day and we've stopped thinking about how this is quite different to how other people live."

The couple have also started sharing their foraging, culinary and survival knowledge with others. They run 'Living Wild' workshops in and around Wainui Bay.