Spirits are up for maker of Blue Agave Tequilana Drink 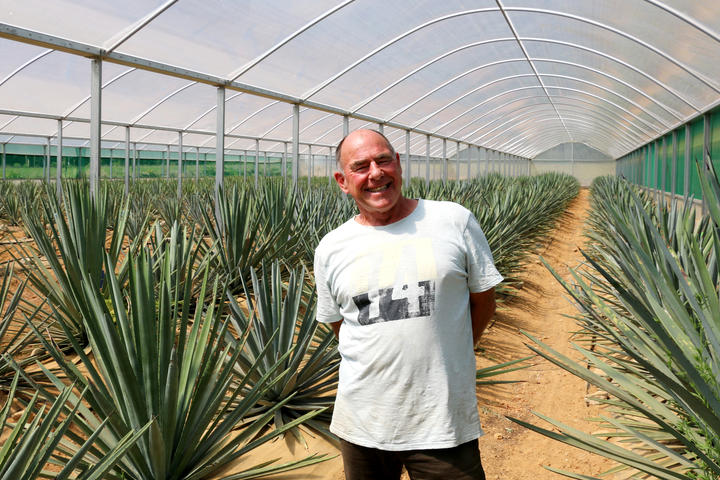 Golden Bay is a long way from home for the agave plant, a native of Latin America and most commonly found in Mexico.

Terry Knight is growing several thousand to produce a top-shelf spirit at his distillery at Motupipi.

His plantation of Weber's blue agave tequilana is the only plant stock and plantation in New Zealand.

Terry's agave adventure started 20 years ago when he bought some seeds from a friend, who got them from a private collection in France.

Since then he's become skilled at propagating and growing them in a massive hothouse behind the Kiwi Spirit distillery.

The spiky succulents can reach a height of two metres and thrive in arid soils so Terry's had to make their growing conditions challenging.

"We only give them a dripper of water once a month for twelve hours, and I actually scraped the top metre of soil off  because it was too rich for them!"

The plants are grown on an eight-year rotational cycle. A small excavator is used to turn them upside down when they're ready to be harvested.

"We take them outside, cut the leaves off and end up with a heart in the middle that could weigh anything between twenty and forty kilos."

The hearts are then cooked into a mash that's then fermented, distilled and refined in copper stills.

"You must have a clear name, so I thought TeKiwi is our native language, it's not making a word up, it's actually calling it a New Zealand tequila."

Despite a hefty price tag of $1000, sales of the TeKiwi tequilana spirit, that comes in a Höglund hand blown glass bottle, are ticking over nicely.

"Last month we sold five bottles in a week and I'm only trying to sell 300 bottles in a year until we come onto full production," Terry says.

The next major agave tequilana harvest is due to take place in about three years' time.