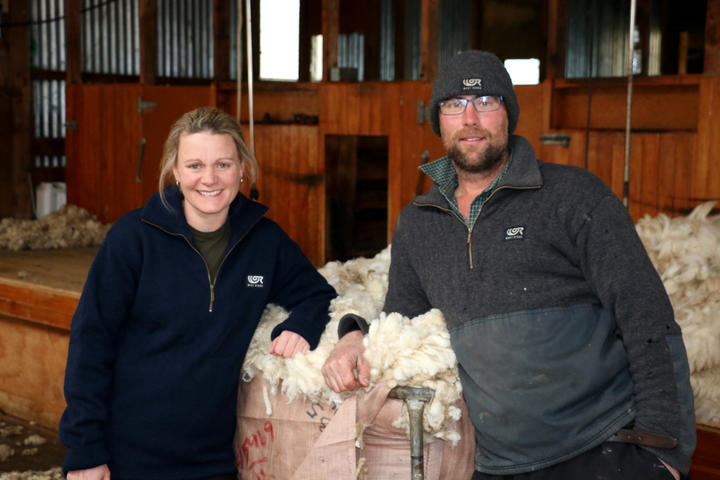 A West Otago couple were so sick of seeing so much synthetic clothing around they decided to do something about it.

Murray and Julie Hellewell run sheep and beef on their hilly 610-hectare Waitahuna West property. The focus though is the sheep.

"The sheep are our money and the cattle are here just to look after the pastures and make it better for the sheep," Murray says.

However, strong wool prices have been trending down for years.

Currently, the wool clip doesn't even cover the cost of shearing. The Hellewells used to shear every six months but now shear once a year.

So a couple of years ago Murray decided to make jerseys from their lambswool.

"I got sick of walking round shops and seeing a lot of synthetic stuff and finding nothing I wanted to buy... on top of farmers whingeing about the price of wool but not doing anything."

Not long after, two bales of lambswool were sent away to be scoured, spun and dyed. Meanwhile, the couple set about designing a practical yet stylish jersey for farmers.

"There have been a couple of prototypes and a couple of fails but I think we're onto a winner now with what we're making," Julie says.

The clothing is knitted and sewn in Dunedin. Producing the jerseys in New Zealand was always part of their plan.

"We were told you need to go to China if you want to get serious, but that totally takes us away from our story and what we were trying to achieve which was 100 percent wool, 100 percent made in New Zealand."

The West Ridge brand is named after their farm. For Murray, it was a no-brainer. "It's where the wool comes from," he chuckles.

The Hellewells can make around 200 jerseys from a 180-kilogram bale of lambswool and they've sold about 1000 so far.

For Julie, the icing on the cake is when she sees people wearing their jerseys.

"First it was people that we knew wearing them, and then you're in the supermarket and see a random [person] wearing it and you wonder who that guy is...it's actually very cool to see them on people you don't know; quite satisfying."

So what's next for the budding brand?

"Well," says Murray "I've got all these ideas…but you've just got to walk before you can run, eh!"