On a mission to destroy wilding pines 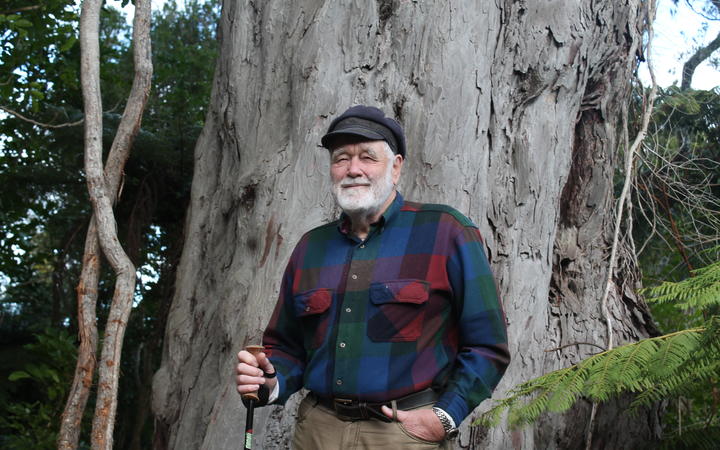 The Marlborough Sounds Restoration Trust is leading the way in New Zealand in the battle against wilding pines which are not only threatening biodiversity but helping to create tinder box conditions in parts of the country.

Country Life spoke to the chair of the trust, Dr John Hellstrom, about efforts to tackle the problem.

The skeletons of dead and dying pine trees stand above the native bush of Endeavour Inlet like sickly sentinels.

Their branches are dropping off and their trunks are white, in marked contrast to the lush green growth below.

John Hellstrom is standing across the bay, pointing out the evidence of the trust's work alongside local residents.

"The trees were poisoned about five years ago and are just reaching the point where they're starting to break down," he says.

"In another two or three years they will basically have dead trunks sticking up with no side branches."

The trust contracts gangs of workers to do the job but some landowners are supplied with herbicide so they can poison the trees on their property themselves.

"A lot of that is happening in the Sounds now, continuing the work we started," he says. 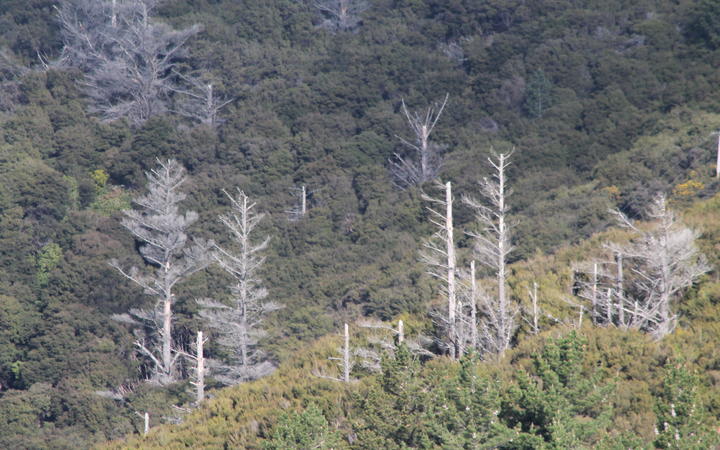 But a mass of healthy pine trees can be seen on the brow of the hill, like soldiers marching in to defend their sickly cousins.

"It's better than you think," he says when asked if it seems like never-ending work.

He says the trust's strategies are working with help from high rainfall allowing rapid regrowth of native scrub.

"The forest canopy grows up very quickly. The reason we poison trees rather than cut them down is that they break down gradually and don't damage the canopy."

The trust has been working since the mid-2000s to stem the invasion aimed at protecting the native bush, bird and animal life of this iconic New Zealand waterway, defying those who said: "the horse had bolted".

"You know when you go into a pine forest it's virtually a monoculture, there's nothing else growing under there so you lose the biodiversity, you lose the streams, you lose the freshwater fish, the amphibia, the lizards," he says.

It's a tough job, though, in such steep country. Gangs of hardy locals bushwhack their way through to get to the pines, drill holes and inject herbicide using a GPS system which aims to have every offending tree pinpointed. 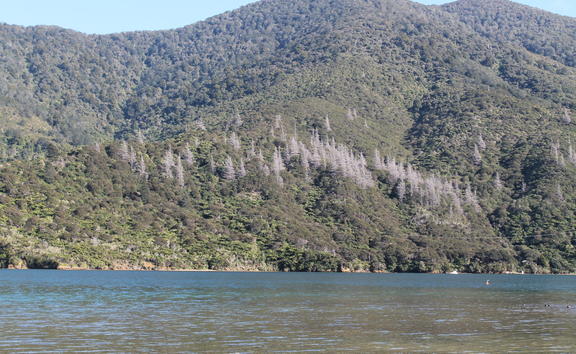 Poisoned wilding pines in the Marlborough Sounds Photo: RNZ/Sally Round

"We very quickly realised the guys who go out and hunt pigs, build fences and cut scrub are the ones we want working here. They're hardworking and enthusiastic," Dr Hellstrom says.

The Sounds is divided up into zones and assessed for priority based on a number of criteria such as landscape value and the risk of invasion.

The trust involves local communities within those priority areas.

"Generally we get a lot of support and also get community groups come to us and say they want to get a particular area done.

"We've got a lot of work to do around the country or we'll lose a lot of landscapes," he says.