Tractors on the Beat 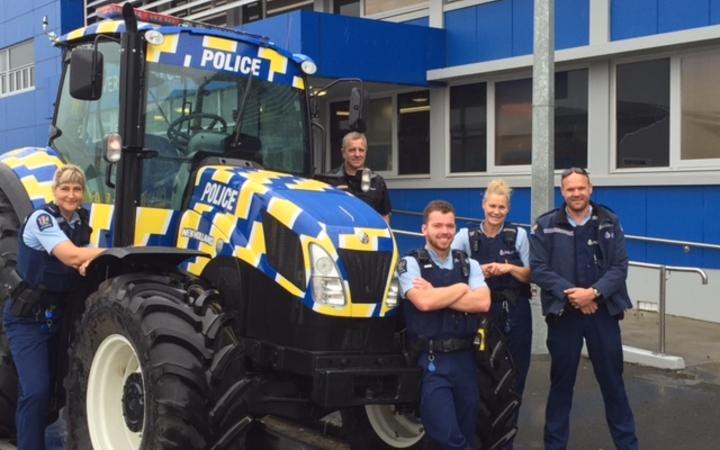 Among his many duties, community policing coordinator Senior Sergeant Alasdair Macmillan is responsible for coordinating the movements of New Zealand's two police tractors.

The tractors, which have been in the force for about four years, are a regular feature at Fieldays right around the country.

He says the machines, complete with police lights and branding, are always in hot demand and he's looking forward to getting them back on the road after a bit of a hiatus due to Covid-19.

Asked why he thinks the tractor is so popular, MacMillan answers with a pun saying it's a real "at-tractor" and recounts a typical conversation with a member of the public looking at one of the vehicles.

"People will come past and stop and say 'hey that's nice, do you chase baddies in it?' No. 'Well why have you got the tractor?' And I said 'because of what it's done to you.'

"I said you've stopped and talked to us to look at the tractor ... and then we start talking about well are you rural, are you urban, what do you know about crime prevention, have you looked online ... if you're a rural property owner have you looked at the interactive security checklist?"

MacMillan said the tractors allow people who would not normally approach the police to do so.

He said one example was a woman at a Canterbury show who got into a conversation with a police inspector after looking at the tractor.

Ultimately that led her to make a formal approach to the CIB about abuse she had suffered from her former partner and to him being sent to prison for eight years.

"But because of that tractor she stopped and talked to a cop, she'd never have done that if it hadn't been for that tractor."

He said he thought the tractors may have only been a passing fad but that hasn't proven to be the case.