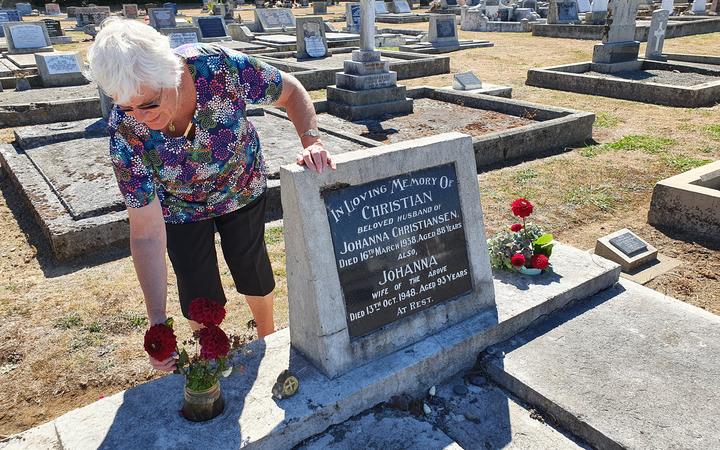 Off State Highway 2, as you head north towards Hawkes Bay, go up a small hill and round a bend and you'll come across intriguing reminders of the Scandinavian settlers who arrived to farm there in the 1870s.

Heather Cheer takes Country Life on a tour of the Norsewood cemetery and retold some of the stories behind the tombstones.

Heather Cheer is carrying red flowers and small stones decorated with a cross and circle.

The red stands for the flags of Denmark and Norway and the stones depict the Scandi wheel, symbolising the tough times and persistence of the hardy people who arrived on the vessel Hovding from Norway in 1872.

The wide wheel rim was needed to grind through the wet and mud as the men and women cleared the land of magnificent native trees known as Seventy Mile Bush.

Heather carefully places the tributes on the tombs engraved with names like Olsen, Larsen, Andersen, Hansen, Christoffersen, Christiansen and Torkilsen.

"A lot of them were so appalled by what they found when they first came here. They were led to believe it was beautiful farmland, ready to go but it was nowhere near that."

Many of the settlers eventually moved to other parts of New Zealand as soon as they got enough money together, according to Heather.

The cemetery is the biggest Scandinavian cemetery in the southern hemisphere and Norwegians, Swedes and Danes travel all the way from Europe to trace their ancestors, she says.

A large unmarked area stands out.

Many children were buried there, says Heather.

Records show several children died in a flu pandemic in the 1880s and wooden crosses which once marked graves were burnt in a big fire in 1888.

Heather stops at the grave of Ole Eriksen, known as the father of Norsewood.

He had plenty of Scandinavian spirit, she says and became a prominent member of the community.

He arrived as a boy and taught himself after being deemed too old at 14 to go to school.

"They knew hard times back in Norway but their expectations were misled and they thought they were coming to something much grander than what they actually found.

"When the women came, they wept and would have liked to have gone back on that ship," she says.