A View from the Vines: John Douglas vs Jack Frost

Last year, John Douglas lost 70 percent of the grapes on his 5-hectare vineyard to frost. This season, he's out in the nerve-jangling wee hours frost-fighting. 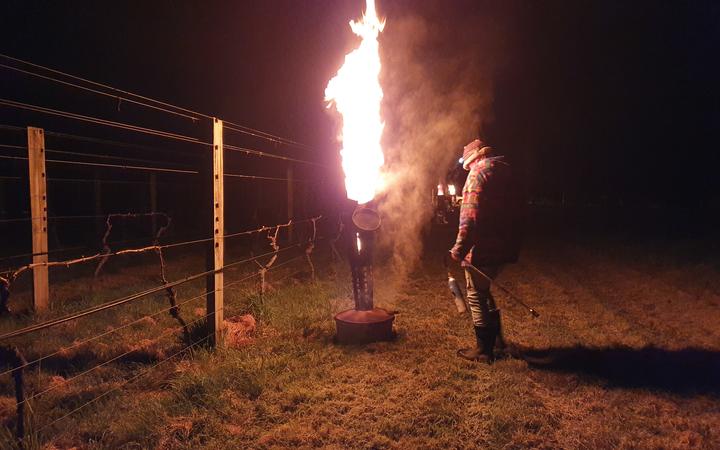 John Douglas lights his frost pots to protect the vines at his Te Hera Vineyard Photo: RNZ/Sally Round

It's nearly two in the morning and John Douglas is slightly on edge.

Rugged up warmly against the chill, he's concentrating on a tiny gleam in the dark.

The indicator light, set in a dip in the vineyard, is flickering from white to red - meaning the temperature's dropping into dangerous territory for the vines which are at a vulnerable stage, their tender leaves unfurling on the canes.

Around John, neighbours' windmills are whirring, thrumming like a chopper coming into land.

They're doing a good job protecting his vines but now he'll need to boost things with his own machine - an older-style windmill run by a throaty Chevy V8 engine.

Frost control is clearly a nerve-wracking process for John, a sole operator who lost 70 percent of his crop to a cracker of a frost - minus 4 degrees Celsius - last year.

With the windmill stirring up the cold air with warmth from above, John sets about lighting frost pots set on the outer reaches of the 5-hectare vineyard.

"Most of it is psychological frost-fighting," he jokes as the flames leap out of the funnel.

The former psychiatric nurse has had to learn how to deal with anxiety in the frost season.

"I used to get really stressed. All you can do is what you can do. The rest is in the laps of the weather gods, whoever they are."

Find out more about John Douglas' year in the vineyard in Country Life's View from the Vines series.