From Canton to Kerikeri: the varied life of Joe Ngan 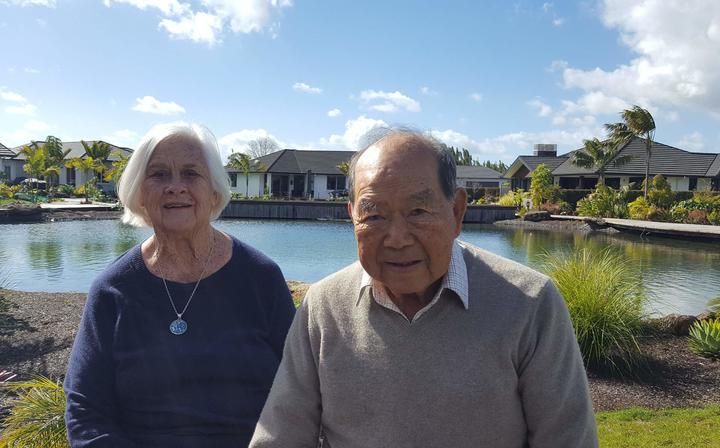 Joe Ngan was born in 1932 in a small village near Guangzhou in southern China.

He's now 87 and lives near his two kiwifruit orchards in Kerikeri, Northland.

But getting to his home of 40 years was a scary and long-winded affair.

When Joe was two, his mother died while giving birth to his sister, leaving Joe and elder brother Sun virtually as orphans. Their father was working in New Zealand.

For a few years, Joe and his brother lived a privileged life with their grandparents.

Ngan Gar Shue taught his grandson Chinese chess and used to bet that six-year-old Joe could beat much older players. He also taught him a little French, believing it was going to become the main international language.

But life as little Joe knew it changed in 1937 when Japan invaded China and the second Sino-Japanese war began.

The family's first attempt to flee to New Zealand via Vietnam was thwarted when Joe's grandfather was hit by shrapnel.

The second attempt, this time without injured Ngan senior, was more successful.

The two boys, Joe (7) and Sun (12), took a boat in the middle of the night down the Pearl River to Hong Kong, from there travelling third-class on another boat to New Zealand.

"I ate bread for the first time," recalls Joe.

Arriving in Wellington four weeks later, Joe Ngan then started the next period of his life; living in two rooms behind his father's greengrocer's shop in Feilding.

Life was sparse and hard. Joe was expected to deliver groceries by bike every day after school.

The year he captained the Feilding Agricultural High School First XV rugby team his father said he couldn't go to Wellington on a sports trip.

"Being captain of the First XV meant nothing to him. He said work was more important."

Luckily some teachers persuaded Chong Ngan otherwise and the compact Chinese boy led the strapping farmer's sons out onto the field at Scot's College.

Joe wasn't quite so lucky in his desire to be a doctor.

Having specifically taken Latin and maths at school, Joe asked to go to medical school.

"But my father said no. White people don't want Chinese for a doctor. You've got three choices: fruit shop, market garden or laundry."

For six years the fruit shop it was, but having saved hard Joe then headed north for excitement and a change.

He worked on a dairy farm, ran a fish and chip shop in Kaikohe, trained to be a teacher and taught in Te Awamutu for years before owning two sports shops for 16 years.

Once the challenge of that dimmed his next adventure was buying a kiwifruit orchard in Kerikeri.

His wife Margot recalls him arriving in Northland (while she stayed behind to sell the house) with two saucepans and no knowledge of growing vines.

Over the years, the couple bought three more orchards and built and ran a kiwifruit packing house, dubbed the Kerikeri Cathedral by locals because of its high-pitched roof.

Joe and Margot still own two kiwifruit orchards which their son Michael runs.