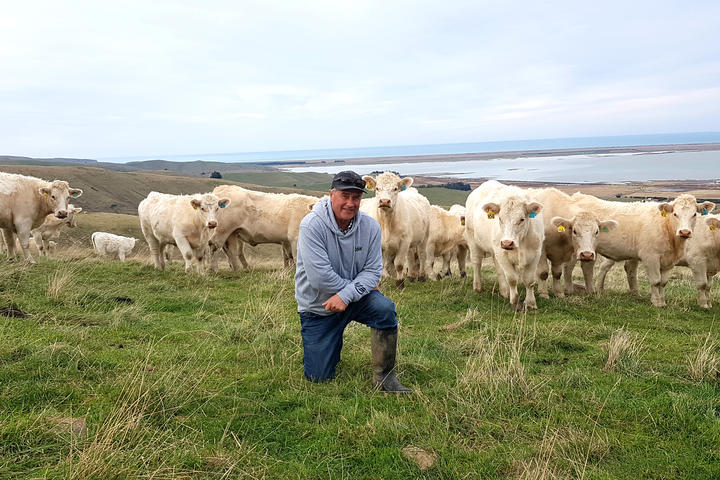 Tai Tapu farmers Brent and Anna Fisher are recognised as some of New Zealand's top breeders of beefy Charolais cattle.

The major focus of the Fishers' breeding programme is to provide Charolais bulls to hill and high country farmers.

The Charolais breed was first developed in the district around Charolles in Central France and prized for its meat as early as the 16th century.

For Brent, breeding these thick-coated white cattle is in the blood.

The Silverstream Stud was established by his parents Bruce and Maureen in 1968 when Charolais beef cattle were first introduced in New Zealand.

Brent has carried on the breeding operation at the family farm near Tai Tapu.

"The Charolais breed gets used pretty much as a terminal sire, so we use them to cross with our traditional Angus and Angus Hereford type cows," he says.

Brent says a bull called Silverstream Evolution has been his most successful bull to date, with lucrative sales of his offspring and of his genetic rights in Australia and Canada.

"His great strength is that he's been so dominant in how he's stamped progeny, he was so sound, just particularly good in his structure. He's ten years old, still alive and he just seems to have bred everywhere he's gone."