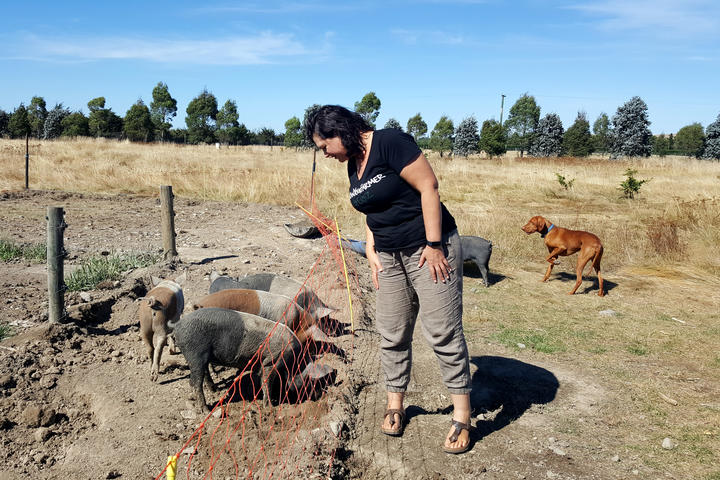 She lives with her husband Nick and their three children on a busy six-and-a-half hectare permaculture property, where they grow more than 60 varieties of fruit and vegetables and raise chickens, turkeys, ducks, sheep, bees, cows and pigs.

"If it wasn't for coffee and chocolate I'd probably be self-sufficient," she jokes.

Four times a year, Angela runs growing workshops at the small family farm that sits amongst vineyards and paddocks in the Waipara Valley.

"We are particularly interested in showing people how they can grow their own food because we think it has huge importance moving forward, particularly around food resilience."

Angela believes people who know how to grow and store their own produce will be the ones who have the best future as the effects of climate change kick in.

She is also the driving force behind Eat New Zealand, a not-for-profit movement that aims to connect people to the land.

As CEO, one of Angela's goals is to make New Zealand a premium food destination.

"One of our major pushes is about short-value chains, i.e. not many steps between the person who has grown or caught the food and the person who is eating the food."

Eat NZ has recently received crowdfunding to support a project called Talking Plates - a pop-up kitchen that will travel around the country to get people thinking about what they can do to personally to change the way we grow, catch, purchase and prepare our food.