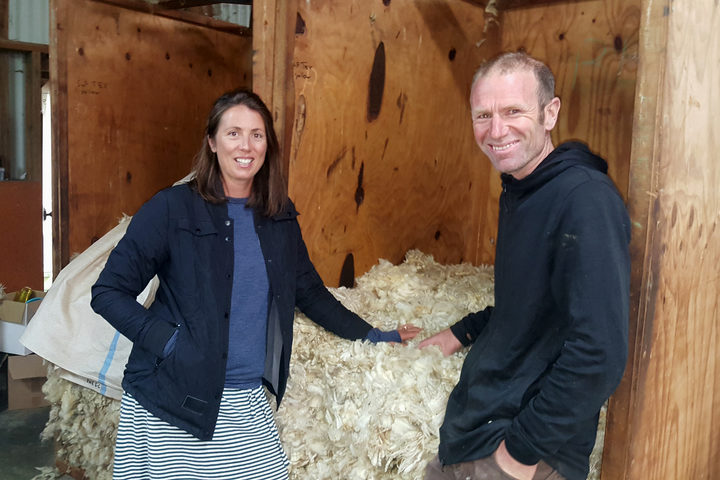 'Diversification' is the keyword for Mt Somers Station owners David and Kate Acland.

As well as farming cross-bred sheep, beef cattle and deer on the 3800-hectare South Canterbury hill property, the couple has converted a block of lower land into a dairy farm.

The dairy operation, which can't be irrigated, was converted in 2012 and milks up to 850 cows.

The deer farm carries 2,000 animals and the farm winters 9500 ewes and 2500 hoggets. The sheep are crossbreds so, with the current low price of wool, it's predominantly a lamb producing business.

Last year, 1,500 were produced. They are sold in over 20 retail high-end outlets, mainly in the South Island. Kate says she wanted to put the four tonnes of lamb's wool, produced on the farm each year, to good use.

"A few years ago I was feeling really sad that we had this beautiful product and we were getting terrible prices for it, so I dreamed up when I was walking one day, to make blankets out of it."

The couple has started producing honey on the property. They have 450 hives dotted around hills and gullies in 200 hectares of beech forest and in a large area of regenerating manuka scrub.

"Up until a couple of years ago it wasn't really worth anything to us until we've discovered manuka honey," Kate says. Some of the honey is sold at the historic Mt Staveley Café and farm shop the Acland's bought in 2015.

David's great great grandfather J.B.A. Acland originally took up Mt Somers Station and a number of other Canterbury runs in 1856 with his business partner Charles Tripp and the station's been through several owners since.

David's parents bought it in 1983 and David and Kate took over the management of Mt Somers station in 2010. It was then purchased off David's siblings following the settlement of his father's estate.

"We've gone through succession and we have to make it work. It hasn't been an easy settlement. We've had to borrow money to do it and, so to then pass it onto the next generation, we've got to work really hard for 10 to 15 years to set it (the farm) up."