Pepin Island near Nelson was bought by a German businesswoman in 1996 for $2 million. 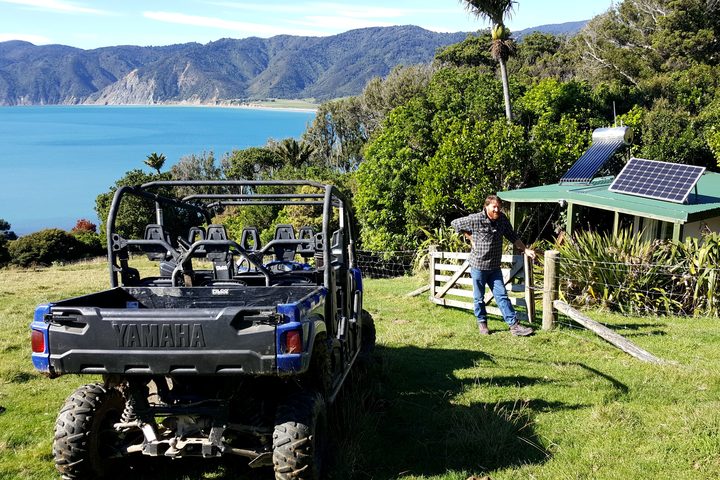 Andrew Newton at one of the huts he has built on Pepin Island Photo: RNZ/Cosmo Kentish-Barnes

She employed local farmers Andrew and Nicki Newton to manage the scenic 521ha sheep and beef property and they've been there ever since.

The island is connected by a causeway to the settlement of Cable Bay and was named by the French explorer Jules Dumont d'Urville after his wife, Adèle Pépin.

The rugged, hill country property is ideal for sheep and beef. The highest point is Stuart Hill, which rises to 399m.

"We have perendale sheep and angus cows. We have, in the past, run merinos when we were breaking in some country, merino wethers, but the profitability dropped off with the cost of replacements and the value of wool of recent years,"  Andrew says.

As well as farming stock, the couple has cleared much of the gorse that was running rampant on the hills, trapped most of the possums that were living on the island and planted thousands of native plants.

"It's certainly been a battle to get the gorse down.

"We're down to a level where we can knapsack things now but it's involved a huge amount of time and input."

Andrew has also built three rustic huts to accommodate people seeking a secluded getaway. To get to them, clients have to walk for up to an hour-and-a-half over the island. It's worth the effort though.

"We've built them over the years for the owner. We've recently added solar power and toilets ... yeah, it's proving really popular."