Karin Bos and Tineke van de Heide – registered nurses originally from the Netherlands – are living the dream on a farmlet in Banks Peninsula. 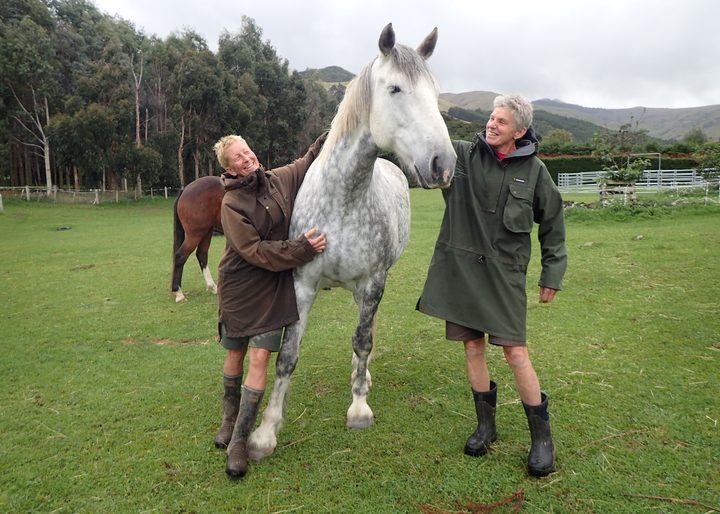 The pair, who work in Christchurch, grow seasonable herbs and vegetables for the Little River community.

They also have a team of horses that have the run of the place; a property with fertile valley paddocks and hills thick with native bush that have been fenced off and put into a covenant.

Karin is proud of what they've done on the land.

"It's regenerating so well and we've got a few tracks though there so we can do the trapping, and now it's a fight to keep those tracks open because the bush goes 'Right, this is mine, I'll have it back!'"

In 1988, the couple went to Australia with a view to living there, but when they didn't meet the Australian immigration requirements they came to New Zealand with a sneaky plan.

"The idea was to stay here for a few years, get a passport and go back to Australia, but New Zealand is way more beautiful so we ended up staying! "

Karin and Tineke are immersed in the local community and have been firefighters at the Little River Volunteer Fire Brigade for about ten years.

As well as doing call outs for fires they are first responders for car accidents and medical calls as well because ambulances take at least half an hour to arrive.

"The most challenging call out lately was the coach coming off the road near Akaroa and we were very lucky that no one was badly injured."

They also compete in firefighter competitions that take them all over the country. Their favourite event is the Scott Firefighter Combat Challenge, which involves five physical challenges.

"They call it the hardest two minutes in sport… For us it takes a bit longer than two minutes, though!" Tineke says with a big grin.