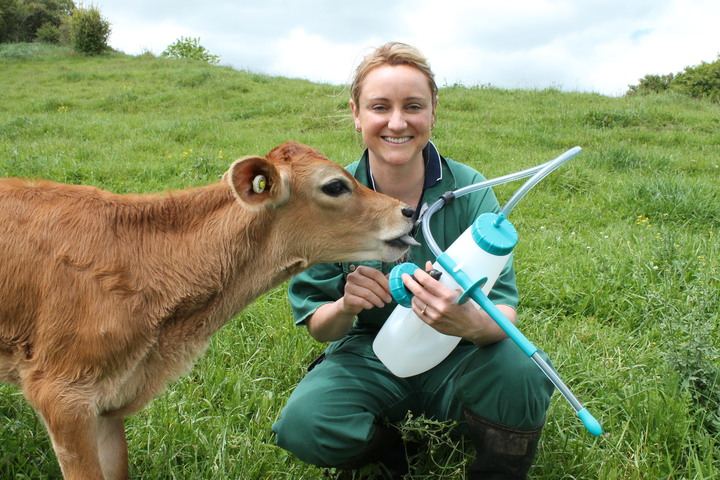 Waikato veterinarian Ursula Hayward and her husband Mark have recently won an award for a new tube feeder for calves that removes some of the stress of the procedure and reduces the chance of injury.

Ursula says she couldn't stand watching calves in distress while they were being tube fed. They can kick, gag and struggle when the tube is inserted into their oesophegas.

So she, and her husband Mark, have designed a less stressful, kinder and easier way of feeding them.

She says the practice of tube feeding varies greatly from dairy farm to dairy farm. Ursula says some farmers routinely tube feed every calf to make sure all the newborns receive colostrum which prevents ill health and has been proven to make them more productive as adults. Others reserve tube feeding for calves that struggle to suck.

Ursula says trials have shown an 88 per cent reduction in signs of stress in calves fed using the new feeder compared to when the traditional more rigid tube is used.  Heart rate, kicking and vocalisation were monitored.

And Ursula says farmers tell her they're hugely relieved they're less likely to bruise, harm or even inadvertently kill their calves using the new system.

It took two years from when she started brain-storming until the Trusti Tuber was launched at June's National Agricultural Fieldays.

"It's been a lot of work getting to this point but when you have people call you up really, really excited because they have been able to save a bunch of calves .. and they've got all the confidence in the world now..then it makes you pretty happy about that. It's all worth it."

The tube feeder has recently been released in the United States and next week it is being launched at a trade fair in Europe.