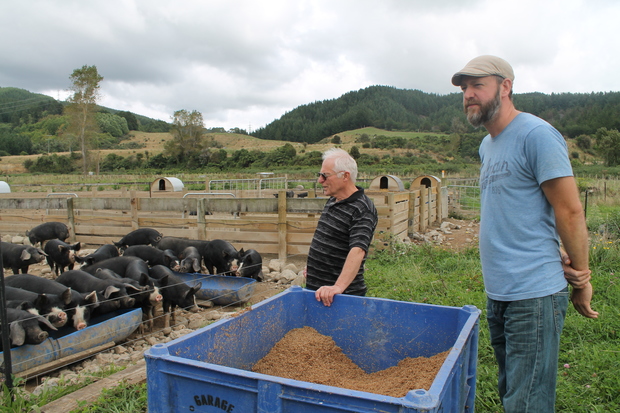 Daniel Todd, his wife Claire and their dog Woody (the farm's namesake) moved from the hustle and bustle of  life in Australia's biggest city to the rolling hills of the Tararua Ranges, just south of Levin three years ago..

Before making the move to New Zealand, Daniel had worked for a consumer electronics company for 17 years.

He says he left his day job for more than just a change of scenery.

"I was bored of what I was doing, and I hadn't learnt anything new for a long time. But also I was horrified of the way that pigs are farmed. Intensively farming pigs is just inhumane, and I love bacon as much as everybody else, so I couldn't really justify buying bacon or sausages if I didn't grow it myself, that was my theory behind it"

Daniel names all the pigs after famous chefs. Once a week he feeds them leftover brewer's grain from "The Garage Project" beer company; a wet, smelly mixutre that looks like porridge.

Daniel sells his pork at farmers' markets and online.