Nine years ago Albino Guien Dakila moved from the Philippines to work on a farm near Winton. Now he runs his own dairy farming operation. 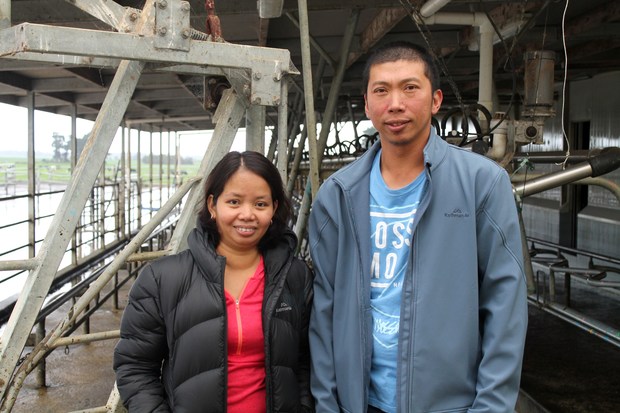 It was hard yakka to start with as it was cold, Albino had limited English and he was very lonely.

"I applied for a job here in New Zealand because there was less opportunity in the Philippines.  It was very hard to leave my family but I need to earn some money."

After two years Albino obtained his residency and this enabled his wife Anna and their children to join him. Anna became a calf rearer and, after lots of hard work, determination and studying, they became variable order sharemilkers in Tuatapere before stepping up to lower order sharemilking near Invercargill.

"It's a much better contract that the one we had before, with variable order (farming) farm management was dictated by the farm owner but here we decide who to hire depending on our budget."

Albino is primarily responsible for milking 580 cows on the 171 hectare property in Rimu. Anna supports him as relief milker and takes care of the administrative side of the business. They have also trained their eldest son Godwin to do the milking.

Their next goal is to move up to a 50/50 sharemilking position. They would like to build their own cow numbers to 350 but the low milk payout has put the brakes on those plans and so far they have 37 cows.

"I don't want to lose a dream but I hope the payout can lift again."