As Christmas approaches, it's all hands on deck in Havoc Pork's salami, smoked bacon and ham-making departments.

Owner Cain Lindegreen says "I see Christmas coming like a freight train… December will  be a long month, there'll  be sleeping in the office, there'll be sleeping on the floor, there'll be cooking hams 24/7 but we've been practicing so we're ready to go."

The award-winning company has been gradually expanding; a decade ago Cain's mother Linda McCallum-Jackson was selling bacon from one pig each week at the Otago Farmers Market. Now, Havoc is processing up to 40 pigs a week into pork products that are shipped around the country.

When Cain took over the family business from his mother in 2014, he moved its processing operation from Waimate to Dunedin to be close to freight routes. Havoc farms 800 free-range pigs at Waimate.

"It was emotionally, physically and financially a big risk, a gigantic step and a lot of hard work, and a major thing for my Mum was to say 'okay boy you can do it'!"

All the pigs come exclusively from the Waimate farm and Cain controls the production process from paddock to plate.  "We mate the pigs, we get the pigs killed, they come here on a hook and we take it from there then we take it directly to market".

Cain runs the smoke house and nothing leaves the butchery without his stamp of approval. He believes it is the flavour of his pork that makes it stand out from cheaper products imported for Canada and the Unites States. "I think once we put the ethics aside and we sit down with a plate in front of us you can taste the difference alright". 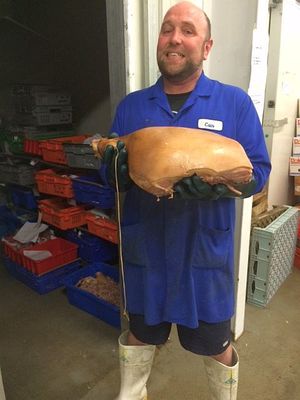