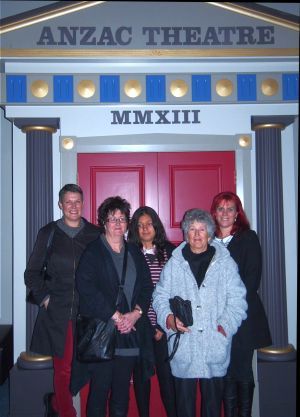 Dargaville's Anzac Movie Theatre is celebrating one year in business, and it all started in a kumara packing shed where the fire escape was the truck delivery door rolled up. The old armchairs and seats with croqueted cushions are a remaining reminder that this is where the movies were first shown in 2009. They're now screened in town, in a purpose built theatre in the old library.

Five years ago a small group of avid movie watchers set up a trust,  put one hundred dollars in a bank account and set about proving that the town of four and a half thousand people could support a movie theatre.

Pictured: Josie Scott (left) with patrons at the Anzac Theatre in Dargaville.

One of the first movies on offer at the Kumara Box, Boy, sold out for days and farm owner Warren Suckling says they needed a parking warden in the farm yard.  With proof of concept behind them, the trust started applying for funds and the building project began.

It took thousands of volunteer hours and willing local businesses providing goods cheaply, but in early July 2013, the Anzac Theatre opened. It still needs volunteers to keep it running, they sell popcorn and ice cream before the shows, and clean up afterwards. Trust member Josie Scott says it's the best volunteer job in town. "You get to see whatever movies you want for free."

Last year's opening coincided with the school holidays and the theatre's only full time employee, Veron Woods, says in two weeks they put through two thousand people. "It was insane. I did 114 hour weeks for two weeks. It was like being the manager of some rock band or something"

The theatre's broken even in its first year and will certainly be around for the years to come. Mr Woods says his job is like having a big toy to play with. "It's just like someone had restored an amazing old car and said take people for a ride in it. Kind of like, here's this neat thing, show it off to people, it's yours to play around with."

And he does. He gets to choose the films and generally, thanks to the support of the movie distributors, they get all the top box office hits the same day as the city theatres.  "What kid wants to wait two weeks for Transformers to come out when their mates somewhere else have already seen it."  Theatre goers range in age from pre-school to mid ninties, but the sixty-plus year olds are the real stayers. Vern says some go to every movie shown.