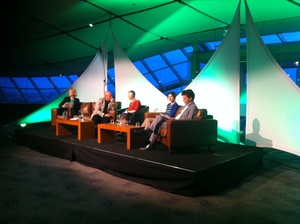 Cities need density. That’s what Ludo Campbell-Reid, the Auckland Council’s Design Champion thinks, adding, “Human beings like each other. They like to come together and we have found the world over that proximity is something that drives innovation and creativity, That’s why you see this huge global urbanisation, of people moving from the countryside to the city. They’re coming to have an opportunity in life.”

These economic migrants are critical, he says, because “to pay for a city you need people. You need rates and you need business money, for the city you create. It’s really like running a business. If you haven’t got enough customers you’re not going to be viable.”

However, the intensification which this greater density entails cannot be reconciled with the traditional Kiwi pattern of suburban development, which positions a single house on its own section. But, according to Blaise Desbordes (Smart Cities project manager of France’s Caisse des Dépôts group) that’s not what everyone wants anyway. He’s convinced that it’s possible to give residents access to enough green space by building low-rise blocks of apartments which are well designed.

“What do you want when you are buying a house away in the suburbs?” he asks. “You want one more room to invite friends home. You want a little terrace to have a barbecue with friends. That’s it! And you can build that without having urban sprawl by building small buildings with eight flats which all have a small terrace, which all have a shared garden for the children.”

For Desbordes, density is a critical issue when considering the new cities to be created from scratch in coming years. In China, he explains, “we will have in the next fifteen years 400 million new Chinese urban citizens. New, coming from the countryside.” For these new residents of these new urban areas, the quality of design and the solutions to high-density living, will be paramount. He suggests that their impact means it’s also key from a global climate change point of view.

Marie-Anne Gobert, a senior advisor on Smart and Sustainable Cities for Lyon, France’s second largest city, reflects on the significance of something which seems unrelated to discussion of sustainability – the length of a mayoral term of office.

In France, there are six-year terms for most local councils. As a result, mayors having to make difficult political choices feel greater freedom than if they were constrained by the three-year local body terms which operate in New Zealand.

When the mayor decides to create a new line for streetcars, she says, there are a lot of people who are unhappy about it. Shopkeepers along the road will say “my shop is going to close because customers won’t come during the work period.” However, if a mayor has six years, the work can start at the beginning of his or her term, and be completed within the electoral cycle. Once the streetcar is there at the end of the six years the Mayor has a chance of re-election, something which is rarer in a place where voting happens more frequently. “If you are the mayor, and have only three years ahead of you,” she concludes, “it means that the work probably won’t be over. It probably means that you made the right decision, but you won’t be re-elected.”

Louise Baker is a Principal Transportation Consultant at Opus International Consultants. She was a finalist for the Sustainability Champion Award in the 2015 NZI Sustainable Business Network Awards. Louise specialises in travel behaviour change, smart transport and transport planning. She’s a recognised leader within New Zealand for her work in the smart mobility and future transportation trends space. Louise is a scientist and a planner, and a qualified project manager, who’s lived in Auckland for 11 years and has spent 17 years working in transport. Notable recent projects include developing a travel plan for Hawke’s Bay DHB and leading a team of researchers to write three strategy papers for Auckland Council looking at what a ‘smart city’ might mean for Auckland.

Ludo Campbell-Reid is Auckland Council’s Design Champion and General Manager of the Auckland Design Office. He is accountable for achieving design excellence in Council’s plans, policies and projects; working alongside the private sector and the community to deliver exemplary design outcomes and spearheading Auckland’s design-led city renewal. He is an internationally recognised urban design and urban planning specialist with over 22 years of public and private sector experience on large-scale urban regeneration projects in London, Cape Town and Auckland.

Blaise Desbordes is Smart Cities project manager of Caisse des Dépôts group (www.caissedesdepots.fr/en). A graduate in political sciences and territorial planning, Blaise Desbordes has worked in several ministerial cabinets (Environment, Development), and has been Head of Sustainability of the French public financial institution la Caisse des Dépôts. He developed sustainable city programs in France, as well as responsible property actions on behalf of United Nations Environmental Program (Finance Initiative). As a senior advisor, he has been part of the French COP21 Climate conference team in 2015 (cities and non-state actors’ mobilisation, Nazca platform).

Marie-Anne Gobert is Senior Advisor, Smart and Sustainable City, for the Greater Lyon Metropolis (www.grandlyon.com). She graduated from École Centrale de Lyon, where she studied Energy and General Engineering, and from the University Paris Dauphine where she studied International Relationships. She entered EDF, the National Electricity Company, in 1998, where she worked in the International Strategy Division (UK, Germany, Spain, Italy and Scandinavian Countries). Then she was a Project Manager, in charge of the strategy of the distribution of electricity, in close link with local authorities. In 2006, she entered the Chamber of Commerce and Industry of Marseilles, as an advisor in charge of the strategy of the Metropolitan Area: how to gather local authorities to create a more attractive and economically powerful territory around Marseille.