It took a tip-off from a member of the public for Taranaki health authorities to find the group of people who eventually tested positive for Covid-19 in the region.

Taranaki DHB medical officer of health Dr Jonathan Jarman told Checkpoint once they were identified, it took days to convince them to be tested.

There are now several locations of interest in Taranaki, including supermarkets, a hardware store and repeated visits to a local pharmacy.

Jarman is now urging people in the region to get tested.

“The strong advice we're giving is that anyone in Taranaki with symptoms should get a test,” he told Checkpoint.

"The reason we're saying that is there's a lot of movement in Taranaki. People work in Stratford, they live in New Plymouth and the other way around … so in fact we're one big community and and it makes a lot of sense.”

Anyone who has symptoms should get a test and stay home until they get the results, Jarman said.

“The ... people we're working with ... have actually been isolating themselves, so they've been very much keeping to themselves largely.

“There will be some locations of interest, but our feeling is that it's a sort of low to medium public health risk, and we're cautiously optimistic, but part of the contact tracing is also identifying people who are close contacts and we're following up with these people at the moment.

“Some of them are symptomatic and we're just waiting for the results that hopefully will come in today.”

There are potentially three people who are symptomatic and one who may have recovered but has been symptomatic. 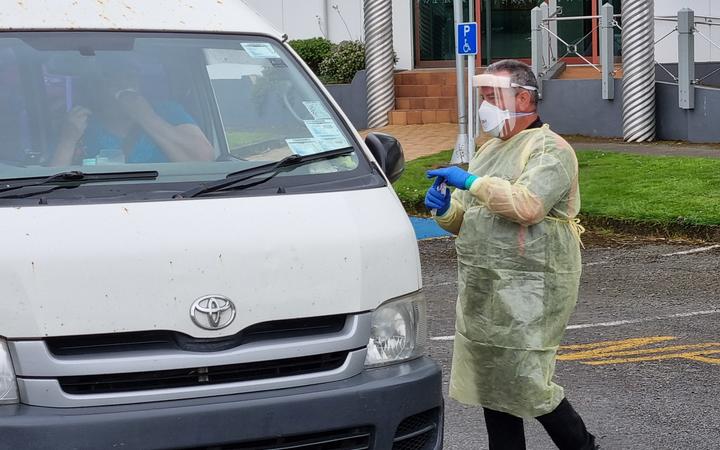 Some of the close contacts were now in the Wairarapa district.

Tests have been organised for them.

Jarman did not know where they lived.

The current cases were a direct link to the people from Taranaki that visited Auckland and there were no cases in between, Jarman said.

Earlier, he said the cases were found through “disease detective work”.

He told Checkpoint "We were trying to find the source of the wastewater tests – they are a very broad brush thing and it's only a backup for personal test.

“So we're getting these wastewater tests that were showing viral fragments, so we knew that someone, potentially who was infectious was actually contributing to that wastewater scheme in Stratford.

“Then we were trying to find out exactly where a positive person may have been - was it a visitor? Was it people that were related to the garden and arts festivals that were happening at the time? … Or was it someone or a group of people that were resident in Stratford?

"As the information became available, we sort of thought at one time it was more like to be visitor.

“Then there was more wastewater tests that became available and then we suddenly realised it was more likely that the family or the group of people were resident in Stratford. That's when we started to go really hard in trying to track down people who potentially had the infection.”

They were eventually found because health authorities heard of a complaint from someone who knew of a problem in the group who later tested positive, Jarman said.

In other words, this person knew the group were unwell and in the community.

It took several days to encourage them to be tested.

Health authorities became aware of the group early this week.

"When it became more obvious that there was an undetected source for the infection, that's when we really started encouraging them to have the testing and it was when one of the family members became particularly unwell that I think the penny dropped and they decided that they should all be tested.”

That person was eventually admitted to hospital and was the sickest he had ever been, Jarman said.

The initially unwell person in the group developed flu-like symptoms after returning from a trip to Auckland in October.

The group’s vaccination status was not yet known.

Asked if the situation was frustrating, Jarman said “really the bread and butter of public health is that we work for all sorts of people and I totally acknowledge that sometimes the test is an unpleasant process and also people can be fearful about the results.

“Some people have religious objections, objections to the test. That’s sort of the art and science of public health - working with these people and encouraging them to go through and have a test.”

Authorities had not “got to the bottom” of exactly what the group’s concerns were.

“We just acknowledge and accept that they were reluctant and I think (we’re) ever so pleased that at the end they did come forward and they did have the test and we have found the source of the positive wastewater tests in Stratford.”

Jarman thought people being ill and not wanting to be tested would be “quite common”.

"I think for that reason, if we can make the testing process better, I think it will be a lot easier for people. Saliva tests are something that are being explored, but bearing in mind saliva tests are only for people without symptoms. If you've got symptoms you still need to have the PCR test with the swab up the nose.”

At the moment, the cases pose a low to medium health risk “based on what we know”, Jarman said.

Stratford Mayor Neil Volzke told Checkpoint a lockdown was not planned for the region at present.

The turnout for testing today had been “amazing”, he said.

“I've just got some figures through in the last hour, to say there were 701 tests carried out in the region today. And of those 335 were done in Stratford.”

Volzke was first informed of the six Covid-19 cases on Thursday night.

It was “extremely concerning” that people were potentially exposed to Covid-19 in locations of interest this week, he said.

Jarman said the coronavirus was coming to all of New Zealand.

"We know that. It's just a matter of time when it happens ... but we're going to have Covid amongst us in the very near future. It's going to become reality."