'America is under attack' - Bush's chief of staff remembers 9/11

Those old enough will probably remember exactly where they were when they learned of the September 11 terror attack on the World Trade Center.

For New Zealanders, it was early in the morning of 12 September when two passenger planes slammed into New York's Twin Towers.

Hijackers flew the first plane into the north tower at 8:46am. Seventeen minutes later, a second plane hit the south tower.

A third plane flew into the Pentagon in Virginia, and a fourth plane crashed into a field in Pennsylvania.

The coordinated terrorist attack killed almost 3000 people. It was carried by militants from the Islamic extremist group Al Qaeda.

At the time its leader Osama bin Laden was being harboured by the Taliban in Afghanistan.

The attack on United States soil led to a war in Afghanistan that spanned two decades.

On the morning of 9/11, US President George W Bush was at Emma B Booker Elementary school in Florida, to read with students. His Chief of Staff Andy Card was with him.

Card would be the man who delivered the world-changing news to the president.

"We arrived at the school, and on the ride over two people did kind of ask a question, one was Dan Bartlett, another fellow by the name of Karl Rove, and they said: 'Did anybody hear about a plane crash in New York City?'

"We arrived at the school and went into a holding room that was a kind of a White House command center, and the President got on the phone with his national security adviser. I did not hear that phone call, but it did not talk about an attack on the United States."

Card said as Bush headed for the classroom with the principal, the national security adviser on the trip told him a "a small twin engine prop plane crashed into one of the towers of the World Trade Center in New York City."

"The President, the principal and I all had the same reaction: 'Oh what a horrible accident they must have the pilot must have had a heart attack or something'."

Bush carried on into the classroom to take part in the lesson. Card remained outside.

Soon after the national security adviser told Card the news the plane that crashed into the tower was a commercial jet liner. Within minutes the news came through that the second plane had hit. 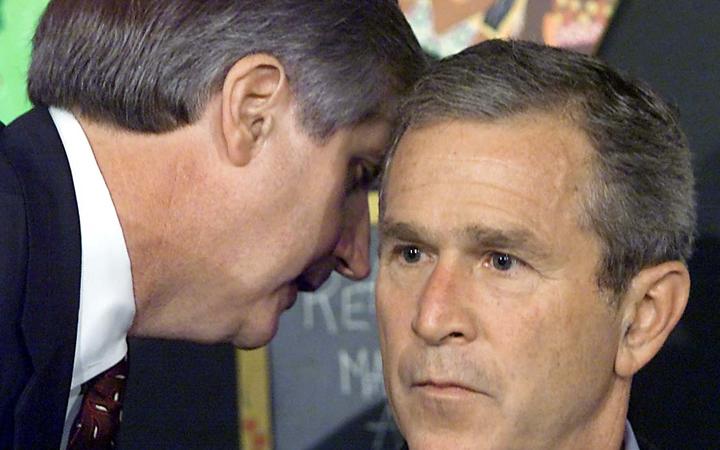 White House Chief of Staff Andy Card tells US President George W. Bush about the terror attack on the World Trade Center, while Bush is reading to children at a school visit. Photo: AFP

"I made a decision that I would pass on two facts and make one editorial comment, and to do nothing to invite a question or start a dialogue because I presumed he was sitting underneath a boom microphone, and I knew he was sitting in front of a press pool with second graders.

"I opened the door to the classroom and stepped in. The teacher of the school, Mrs Daniels, was conducting a dialogue between the students… Then the teacher told the students to take out their books as they reached under their chairs and desks and pulled out the book that they were going to read with the President.

"That's when I walked up to the President, he did not see me coming, he did kind of glance in my direction when I leaned over and whispered into his right ear: 'A second plane hit the second tower. America is under attack.'

"I stepped back from the president so that he would not ask me a question, he never turned around to me but I could see his head bobbing up and down. I was very impressed with how he reacted. He did nothing to introduce fear to those young second graders, and he did nothing to demonstrate fear to the media, that would have translated it to the satisfaction of the terrorists.

"I believe that day was a day he recognised what the real job of being president was, and that he had the resolve to meet that responsibility."

Card immediately started trying to make contact with the director of the FBI, who had only been in the role for 10 days. He told secret service and Air Force One staff to prepare to leave.

"I knew that I was delivering a relatively unique message in an absolutely bizarre forum, where you couldn't have a conversation, and yes, it was a message that was going to cause the world to change from what we knew it to be.

Eventually the President and his delegation were on Air Force One, going back to Washington DC.

"We saw the replay of the attack on the World Trade Center, we saw the buildings collapsing, we saw the people jumping out of the windows when the fires were there.

"The President was looking out the window as Air Force One was coming in to land at Andrews Air Force Base in Washington DC, you could see the smoke billowing out of the Pentagon, and the President turned to me and said: 'That's the face of war in the 21st century'."

Card said what followed was, "a dramatic change of foreign policy, as well as a big change in how we worked about protecting ourselves."

The Department of Homeland Security was created after the attacks. And at airports ever since, people boarding planes have seen more strict rules on luggage, and face more security checks.