Mask wearing is compulsory on public transport across the country but it is a rule many appear to be ignoring.

Whether it is the regular morning bus commute, a weekend ferry ride or a train to the big game, there is supposed to be a mask on your face.

Checkpoint stopped by a busy bus stop near Auckland Hospital, where people were waiting for their ride.

"On the bus that we came in this morning, the driver wasn't wearing a mask. I think we're a bit complacent now you know we've had so much freedom for so long," said one passenger.

"I feel like no one really cares about it anymore," said another.

"I take the train and on the train every morning they say that like wearing masks is compulsory. It's kind of sad like when sometimes the bus drivers themselves don't put the masks on. That's kind of like frustrating I guess."

On a lunchtime ride from the hospital to Queen Street, three out of about 15 passengers were not wearing their masks.

Not all drivers have to wear them - if the bus is not in service they are exempt and so are drivers with health exemptions.

This bus driver had some strong feelings on the issue.

He had given up telling people to put them on.

"I have noticed some passengers have taken it on themselves to kind of be the mask police and that hasn't worked. It's better to just wear your own mask." 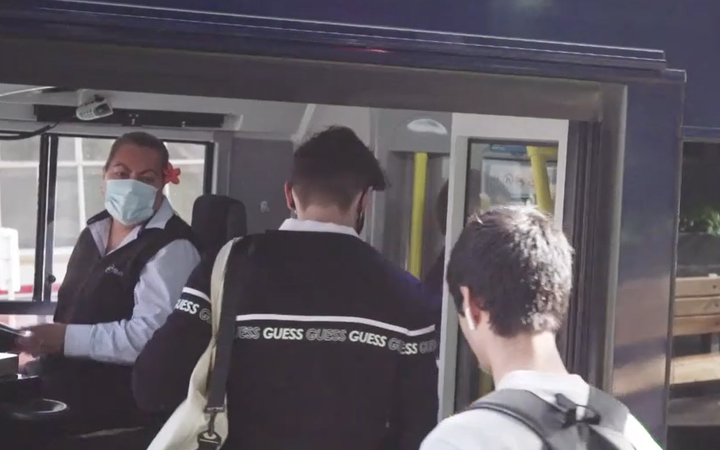 "It's not good, but we're not forcing them, they just walk in."

"Compliance has dropped, so during the commuting peak it's still pretty good. You know there is a high level of compliance cause people were doing that in the everyday life and they were used to it, it's outside of that period so off peak and in the weekends things drop and go to the side."

But it was not up to them to enforce the rule - that was a job for police.

Transport officers working on ferries and trains did remind passengers - and even handed out masks.

A Ministry of Health spokesperson said they were encouraged by the uptake of face covering usage, especially during alert level 1.

And they were working with transport operators to promote face masks as one way to minimise the spread of Covid-19.