Frustrated workers at Marsden Point feel abandoned by the government ahead of a vote over whether to cut hundreds of jobs. 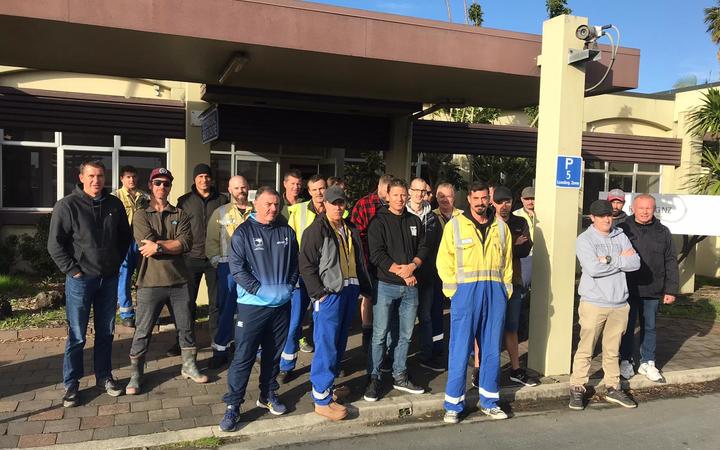 A Refining NZ shareholder vote on Friday will determine if 300 jobs will be slashed to just 60 to manage an import only terminal.

But hundreds of other jobs - contractors and local businesses - would also likely be lost.

Today workers gathered for a union meeting to discuss their future and many described their disappointment and frustration at the way the potential shutdown had been handled by Refining NZ - and the government.

Shane Hool has worked at the refinery for 32 years but said the coming months may be his last if the close down, proposed for the second quarter of next year, goes ahead.

But he said there were concerns the refinery might not even make it that far, with staff leaving in droves.

Plenty of people are looking elsewhere - with many eyeing up work across the Tasman.

One worker, who did not want to be identified, said it was incredibly hard to find well-paid local work.

"There aren't any options in Whangārei - we've got the highest unemployment rates in New Zealand and that's the reality."

Shutting the refinery without a plan for workers or the site was madness - and far from the 'Just Transition' the government promised, he said.

"They managed to subsidise Tiwai Point to keep it alive which is not a national security asset, it doesn't provide anything for this country, it supports a multinational mining company."

That was in contrast to the refinery, which he said didn't seem to be important to the government, and may become a problem for them.

"Labour won the seat of Whangārei and the seat of Northland for probably the first time in my memory... they will never win it again if this refinery closes."

Refinery operator Greg Ventnor said he had seen the same problems play out in Australia where the government is subsidising its refineries to keep them open.

It was vital we do the same here to ensure fuel security, he said.

Energy Minister Megan Woods says the government is talking with staff and stakeholders about future options for the site Photo: RNZ/Samuel Rillstone

First Union transport secretary Jared Abbott agreed fuel security was a huge issue. The government needed to step up and bring in a fuel levy to subsidise keeping the refinery open, he said.

"You need to have these types of strategic assets protected."

She said different uses for the refinery site were being considered, but they were not going to come before April next year.

"This is our Tiwai Point, this is our Taranaki... and we do definitely look to central government for their support. So the question needs to be posed to them; what are their plans, how can they help - and they're certainly around the table for those discussions."

In a statement, Energy Minister Megan Woods said the government recognised it was an unsettling time for workers and it was talking with stakeholders and staff about future options for the site.

She was interested in the possibility of Refining NZ helping with the transition to a net zero emissions economy, such as potential biofuels production.

But Woods said the switch to import only would not affect fuel security because New Zealand could source fuels from multiple refineries in multiple locations.