Plans for a massive water take to grow more avocados in the Far North could get the green light in the coming weeks, but there are major concerns among some locals about what that will mean for the environment.

An application to take billions of litres from the Aupouri aquifer, which sits right at the top of the country, is currently being considered by independent commissioners.

A decision is expected in August. While there has been opposition from the Department of Conservation and many in the community, those wanting the water say the environment is their primary concern too.

In recent years the view from State Highway 1 north of Kaitaia has changed extensively. Former paddocks are now covered with bright wind breaks, protecting tens of thousands of avocado trees, stretching as far as the eye can see.

Ian Broadhurst knows a lot about the conversion. He has been growing avocados in the Far North for more than 30 years, and is now the manager at Mapua Orchard, New Zealand's biggest grower. Mapua has about 100,000 trees.

While he has been in Northland for decades, in the past four years he said the area has been transformed, as hundreds of hectares of avocado orchards have been planted.

"I would say that of that 500 hectares, 450 hectares of that was ex-dairy farm, so definitely dairying has been in the decline and horticulture has picked that up," he told Checkpoint.

"I heard the other day, I think there were 30 fishing boats that used to work out of Pukenui, out of Houhora Harbour, there's two now. So there's been big changes. Horticulture is the big winner in all of this."

That conversion has seen huge money pumped into avocados, he said. 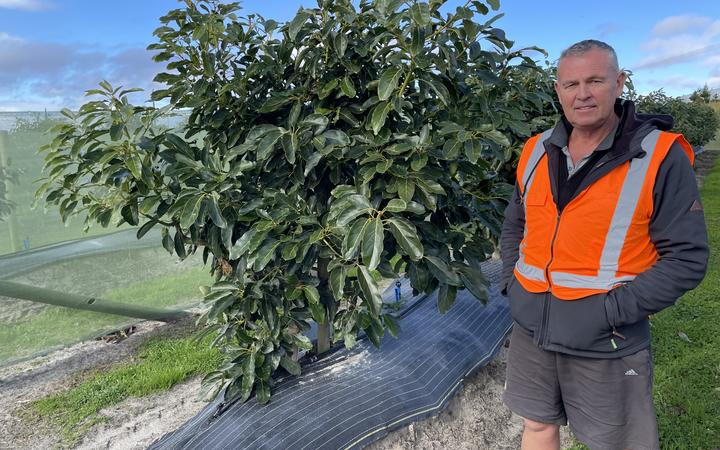 Ian Broadhurst has been growing avocados in the Northland for more than 30 years. He is now the manager at Mapua Orchard, NZ's biggest avocado grower. Photo: RNZ / Nita Blake-Persen

"The way we grow avocados now, it's probably $100,000 per hectare investment in terms of planting and establishing and putting all the infrastructure in. It would easily be a $50 million investment."

And more people want in on the action. An application by 24 landowners to take 6.2 million cubic metres of water each year is currently being considered by Independent Commissioners on behalf of the Northland Regional Council.

That water will come from the the Aupouri aquifer, an ancient water source that sits under the peninsula.

'If they keep drilling ... it's going to be saltwater intrusion'

While not all applicants want the water for avocados, the majority do. There's plenty of concern about what is at stake.

"If you talk to people you will hear stories… people that have lived in these areas for a long time – 'there used to be water there, now there isn't, a bore has dried up, I've never seen this in my lifetime' – and I've talked to a lot of local people," Karyn Nikora Kerr told Checkpoint.

She lives near Ngataki, an area where avocado growth has been massive.

"I've talked to people that have been working in the orchards, that have come to me. They are worried, they don't want to talk about it because they're going to lose their job. Totally understand, they're between a rock and a hard place," she said.

"There's got to be another way that we can help the aquifer, because if they keep drilling and doing what they're doing and developing, something's going to go and it's going to be saltwater intrusion."

Nikora Kerr said there were other ways of growing avocados, without sprays for example. But she has massive concerns about what she sees happening at the moment.

"If you look at avocados and the way that it's been put up, there are many people just starting to realise how big it actually is.

"They're worried about these big orchard owners that have come and developed… They will sell what they've created, make money, [but] they don't live here, they're going to go away.

"What if something happens to the water? I can't say it's going to; they can't say it isn't.

"Our council's mentality [is] the risks will be no more than minor. You can read it in a million bits of paperwork of their's. They cannot prove that."

She is opposing the latest water take application as she did a previous one which was granted in 2019.

That take, for more than two million litres a year, was eventually granted after the Department of Conservation appealed against it.

The case went to the Environment Court, which backed the decision for the water to be handed out. However, checks were put in place to monitor usage and adjust where necessary.

'I'd prefer dairy... far less invasive on the environment than avocados'

But locals say they are still feeling the effects.

John Johnson lives near Waiharara with a wetland on his property, and avocado orchards for neighbours.

"I'd prefer to have dairy, because from what I've experienced dairy is far less invasive on the environment than the avocados.

"From what I've been told by the growers it would be organic and fantastic. It was nothing like that.

"The intensive industrial monoculture they do… the intensive spraying, artificial fertilisers, injecting the trees to stop the phytophthora. It's like junkie avocados.

While Johnson said things have improved from what he describes as the 'wild west' days of early avocado growth, he still has grave concerns over the latest water take. 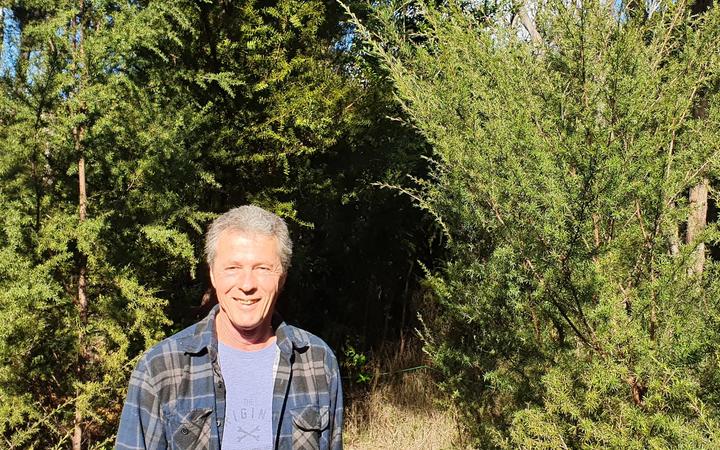 John Johnson lives near Waiharara with a wetland on his property, and avocado orchards for neighbours. Photo: RNZ / Nita Blake-Persen

"The horse has bolted really, it should have been stopped in 2018 when the Environment Court said this water take shouldn't go ahead. But because there's so much money being sunk into the avocado industry now, it's beyond stopping. It's too big for council or anyone to stop. It's tragic, it should never have gone ahead, but it's too late now.

For local landowner Alan Nunns, the water plans come with huge risks, particularly ocean water leaking into the aquifer as it is drained.

"The aquifer is basically a fossil aquifer, a deep aquifer, so it's been there for quite a long time and it's a very precious resource, and it's a fragile resource because if it's over exploited then you'll get quite easily seawater intrusion - seawater coming into the aquifer from either the Tasman or the east side, most likely the east.

"Obviously the aquifer is being used at the moment, both for farming, for residential use, and for avocado farming. But the scale of these permits is what concerns me."

Nunns, with a PhD in marine geophysics, has a lot of technical knowledge on the issue. He said the information the application is based on does not go far enough

"We don't know enough at this point to start draining the aquifer at the volumes they're talking about."

He estimates the planned water take is enough to sustain about 73,000 people each year. Currently about 4000 people live in the area.

'I'd prefer to see a more diversified form of agriculture'

Nunns wants other economic development considered for the area to make it more diverse.

"It's wonderful that Aupouri Peninsula turned out to be such a wonderful place to grow avocados. It has been good and there are a lot of people up there who are doing it very sustainably and very carefully, but I'd prefer to see a more diversified form of agriculture and other business there than just have the whole peninsula covered with avocados."

But those wanting the water say the sustainability of the aquifer is vital to them too, and they won't be doing anything to endanger it.

Martell Letica is the planning consultant representing the 24 applicants. She has been working on the issue for the past few years and said the science was thorough. She also said there were checks and balances to protect the water source.

"If we get to those trigger levels, there is a response mechanism available. To me, yes the stakes are high, but the responses that are in the contingency plan are very severe."

She said the applicants, including three hapū, are kaitiaki of the whenua and they want the water to be used as carefully as anyone else.

She said the boost to the community had been massive.

"Kaitaia and Kaikohe to me were quite similar in their townscapes. Now Kaitaia has the Te Ahu Centre, they've got this revitalisation project going on with reserves areas. It's a vibrant community."

Mariameno Kapa-Kingi is the chief executive for Te Rūnanga Nui o Te Aupōuri, which is the largest applicant for this take.

She said they were still finding out how avocado growing is affecting the area.

"We need to know more to be able to understand completely whether that is so. Instincts are, 'that's a whole lot of avocado trees', but equally, I can see all of our whānau, that's where they've got their job.

"Can those things exist together and can we know more to actually make better decisions about whether the aquifer will be negatively affected for the future? I need to know more. I need to understand that better. And I don't know whether we do, I've got to say."

'We're happy to develop along the right track'

Haami Piripi chairs Te Runanga o Te Rarawa. He said avocados have absolutely been a force for good on the north.

While he said Te Rarawa doesn't have plans for avocado growing at this stage, he trusts the science around the water take.

"The biggest fallacy I think is avocados' need in terms of water… People just think because they see a tree that it takes more water, but actually it takes a lot less water than a cow.

"I found that knowledge very empowering. We're a part of this region's development and we're happy to develop along the right track. And according to the science this track is okay."

One of the loudest voices opposed to the water application is the Department of Conservation, which said its primary concern is the potential effects on local wetlands and lakes, including the Kaimaumau wetland, Lake Rotokawau, Lake Ngakapua, Lake Ngāti, Lake Rotoroa, and the Sweetwater dune lakes.

The Kaimaumau Wetland in particular is home to a number of threatened species, including the native fernbird and several orchid species.

DOC said taking water from the aquifer will compromise an important natural habitat and the biodiversity of the area. It said it has concerns the applications have not demonstrated enough clarity in terms of how the adverse effects of the proposal will be avoided, remedied or mitigated.

The future of the aquifer now lies with independent commissioners, tasked with considering all sides of the debate.

Nikora Kerr said she expects the applications will be given the green light. She is not happy about it.

"If this goes through, that tells me the process with the system doesn't work. Two hearings, taxpayers' money being used - because if DOC appeals and goes to the Environment Court, which it did, and then the Environment Court gives a decision and then the councils and the applicants and everyone doesn't listen, what does that mean? How do you move on? Because it's just going to keep happening."

A decision over the highly-contentious issue is expected to delivered before the end of August.