Disabled people in relationships paying for the price of love

People with disabilities in relationships are paying for the price of love - losing their allowances because they are coupled up.

The Ministry of Social Development assumes people in relationships share their finances, but for people with a disability, that means expensive medical costs are no longer covered.

Couples say it is wrong that they should be weighing up whether their relationship is worth the hit to their pocket, and there are calls to overhaul the benefits system. 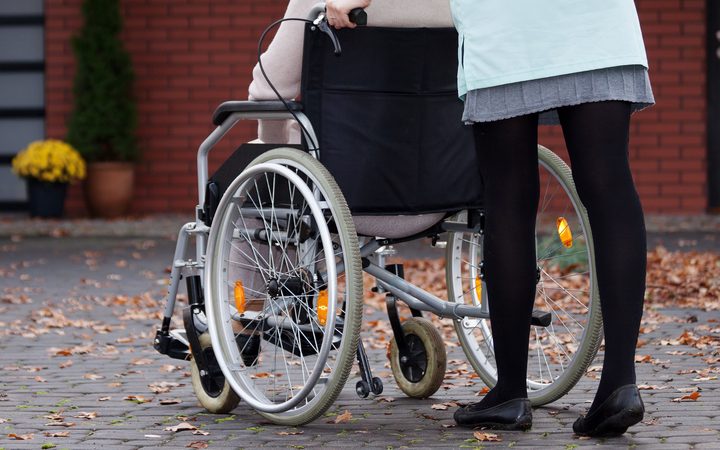 Being in a relationship has been costly for Amy Bradley and her husband, Pete.

She has muscular dystrophy and cannot work, he has dwarfism, but works fulltime.

When she declared their relationship to MSD, her disability allowance and supported living benefits were cancelled, weeks before he even moved in.

That was because he earned slightly more than the $1031.20 weekly limit. The move left him with a hefty bill for her needs.

"For my husband to have to buy incontinence products for me, it was embarrassing," Amy told Checkpoint.

What was covered by her benefit was gone.

"I've got no St Johns alarm because we just can't afford that a week. We're very careful regarding power because I have a lot of medical equipment that runs on power. I won't go to the doctors as much as probably what I should."

She said the process had left her guilt-ridden.

"I'm not equal in any part of my relationship, I'm an absolute burden on my husband. Being married doesn't cure disability."

She said it was wrong that couples had to weigh up whether it was worth it to be together.

It was a similar situation for Alistair Gregory, who has spina bifida, and his wife, Carlee.

They have been together seven years, but when they declared their relationship, they lost their benefits.

"In my experience, I don't think that's fair because what is the difference between two people and one person? Still both got to pay bills, pay rent, that sort of thing" he said.

Alistair worked about 30 hours a week while studying. His wife was studying and looking for a job, with no luck.

They got $110 each from MSD a week, but it was temporary support and not classed as a benefit.

He said that left them in a tight situation.

"Luckily we do get some parental support sometimes, but if it wasn't there, we would be struggling."

Two years ago the Welfare Advisory Group recommended the government reassessed what they defined as a relationship for disabled and non-disabled couples.

Dr Huhana Hickey was part of the group. She has a disability and has been through a similar experience.

Her partner gave up working to become her fulltime carer - so she did not lose her disability benefits.

"That's ridiculous. Why should they have to lose the dignity of receiving a salary? She chose to be poor with me rather than to go out there and live life and have a chance for a better income," she told Checkpoint.

She said the assumption that a partner would automatically support them needed to change.

And for disabled people who work to support themselves, they are often offered a job in a different city where there was no accessible housing.

"So if you get a job in Wellington and you can't get a house in Wellington, you can't get that job. So you see if one area is broken, it breaks everything down, and so you're not necessarily living where you'd prefer to live" she said.

She is pushing for people with disabilities to have a seat at Parliament's table.

"Unless we get our own entity, our own legal entity that puts the disability voice in there nothing is going to get better for us simply because we are getting able bodies to make the decisions for us and they're failing us to a crisis level."

In a statement, MSD said they are required to take all income received by someone's partner into account when assessing someone's benefits.

In a statement she said a range of recommendations had been made regarding income support for disabled people.

She said work is underway looking at the definition of relationships for disabled and non-disabled beneficiaries.

More advice will be coming as part of the welfare overhaul programme later in 2021.