Hayden Wilde has won bronze in the triathlon in Tokyo, putting New Zealand on the Olympics scoreboard. It has been an amazing journey for the 23-year-old athlete. He tells Lisa Owen how he got there.

It was an "unreal feeling" to win a medal, he said, especially being the first New Zealander at the Games to win one. Whakatāne Fishing Club was "going off" as his family and friends celebrated.

The New Zealand team back at the hotel were also excited. 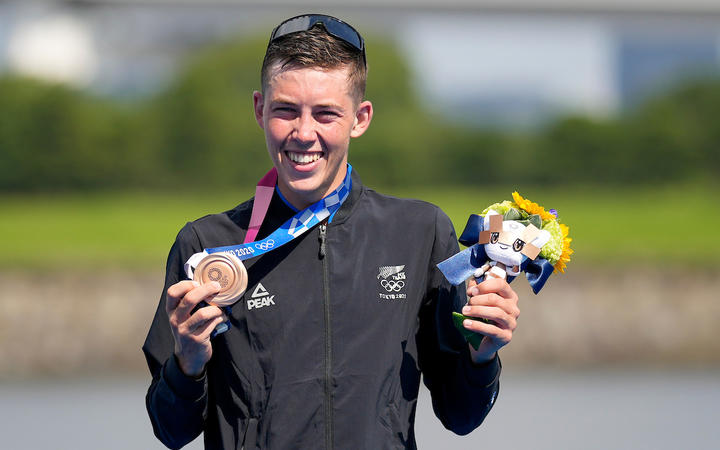 When he got back to the Games Village he was greeted with a haka and there were some "pretty inspirational people" performing it.

It was special to be greeted by so many smiling faces, he said.

"I think I'm just full of adrenaline still and I have to hope I keep riding the wave."

Wilde took third place on the same course in 2019 and it was amazing that he had managed the feat again today.

He paid tribute to the team behind him, saying triathlon was definitely not an individual sport and his team contributed to his success.

After crossing the finish line, it was emotional thinking of his family especially his father who died about 12 years ago.

He first got into the sport after being impressed with how the Kiwis performed in Rio in 2016. He told his new coach a short time later that he wanted to get to the Olympics.

His first three years as a triathlete had been "full on" as he combined a part-time job as a landscaper in Tauranga with his training, including 5am starts in the swimming pool.

However, it made him hungrier to succeed.

"To have that raw emotion, it has come straight from the heart ....it's unreal."

His bronze medal felt "pretty weighty" around his neck, he said. He already had a catch up with former champion Hamish Carter soon after finishing his race. Carter had passed on that he believed the current batch of medals were heavier than the gold medal he had been presented with.