A number of councils are already criticising the government's major overhaul of the country's water systems, unveiled with the aim of stopping household water bills skyrocketing.

The plans would see management for the 67 council's drinking, storm and wastewater infrastructure handed over to four mega entities, but that left a bad taste in the mouth of some mayors.

New Zealand's drinking water systems went under the microscope in 2016 when thousands of Havelock North residents fell ill from a gastroenteritis outbreak in its water supply.

Local woman Viv Blake remembers it well and said it was a scary time.

Businesswoman Monique Blunden said it hit the community hard. Her family was among the lucky ones as they did not get sick.

"We were okay but I do know it affected a lot of people and certainly businesses - it was a rough time." 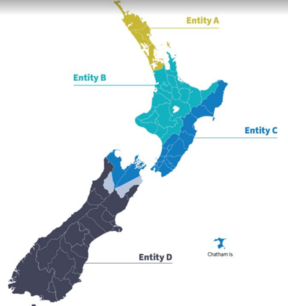 With up to $185 billion needing to be pumped into water infrastructure over the next 30 years to protect against that kind of thing happening again, Local Government Minister Nanaia Mahuta said the case of change is a compelling one.

The government said the so-called Three Waters would remain in public ownership and be governed by an independently appointed board.

"Since the 2016 Havelock North contamination event, we still have communities that operate on an intermittent boil water notice that are affected by waste water or storm water going into oceans.

"We still have communities where burst water pipes disrupt their daily lives."

Modelling suggests without reform the average household bill for water services - not water charges - could be between $1900 and $9000 by 2051.

Prime Minister Jacinda Ardern said ratepayers would be the winners and several councils are positive about the proposals.

She said there was broad support within local government - but not everyone was on board.

Auckland Mayor Phil Goff was concerned. He agreed water reforms were needed but believed the proposal would not benefit Aucklanders.

"Aucklanders have invested heavily in building up Watercare's more than $10 billion worth of assets, with a further $11 billion invested in water infrastructure in our current 10-year budget," he said.

"Control over those assets, and our ability to ensure that Aucklanders' needs are put first, is undermined by the reform, which proposes that we could have less than 40 percent of the council representation in the governance of the new entity.

He also worried the changes could result in privatisation in future.

"The new body will be more susceptible to privatisation as has occurred in the United Kingdom. Safeguards put in place against this by the current government can be easily repealed by a future government."

The mayor said they had put forward alternative proposals to the government.

Ruapehu Mayor Don Cameron told Local Democracy Reporting the joint representation model was vital and should be protected against changes of government.

"It is along the lines we've been negotiating for some time - ensuring there is both local government and iwi presence on those boards. Central North Island iwi have real interest in rights of water going north.

Tangata whenua will have equal rights with councils in overseeing new services for drinking water, wastewater and stormwater in the reforms proposed by the government.

Mana whenua appointments to the four joint oversight groups will be guided by a kaupapa Māori approach. Each of the new entities will fund and support mana whenua capability and capacity to participate in the entity's activities.

The Regional Representative Groups will put in place independent panels to appoint boards for each of the four entities.

"Latest figures suggest New Zealand needs up to $185 billion to bring three waters up to speed. The data very clearly shows a smaller number of entities managing water services in New Zealand is the best thing for our communities and for New Zealand overall. That is the case for every community," she said.

"In Hamilton analysis shows that, without reform, the average household cost for water services would more than double. For other councils, the numbers are far more sobering."

On the other end of the spectrum, Whangārei District Council decided yesterday to opt out of the three waters reforms, the Local Democracy Reporting service reports.

Mayor Sheryl Mai said her council needed to make sure its ratepayers were not disadvantaged from being part of any reform.

The council had not been able to get enough information to make a wise decision around this and was therefore opting out of the reform at this point, she said.

The government claims that without the reforms, Gisborne and Wairoa households would be paying $8700 annually for water infrastructure in 2051, but only $1260 with the proposed reforms.

Little said he was not yet convinced, and if the review process was anything to go by Wairoa would consider opting out.

“Unfortunately, the government has had a hidden agenda on the three waters review from day one. There appears to be an approach of scare tactics and heroic assumptions.

“Status quo was never an option and there has been no transparency, which has caused a lack of trust and lack of confidence.

“We have had no significant decision-makers visit our town to see our unique situation. You cannot make radical change like this by just looking at figures.”

Each of the 67 councils have until December to opt out of the proposed reforms.