One woman is highlighting, literally, with spray paint, the dog poo blight that is left on Dunedin's popular West Harbour walkway.

Antonia Wood and and her family live in St Leonards and are regular users of the track.

But she's had enough of scraping dog faeces off her young kids - their shoes, her shoes, the car and so on.

She says it's a minefield of discarded droppings out there. So Antonia thought she'd take stock of what is a pretty crappy situation.

"We wondered what we could do about it. We bought some water-soluble hi-vis spray paint and decided to spray paint the poo so other people would see them and stop standing in them like we have been doing."

The brand-new can of paint ran out after spraying dog poo for 500 metres down the path.

It was a surprise.

"I knew there was lots out there but it wasn't until we started spraying them that we realised actually how many there were."

She thought it was disgusting.

"Dog owners need to take more responsibility ... but also watch their dogs because I think some dogs trail behind their owners and poo when their owners aren't watching. 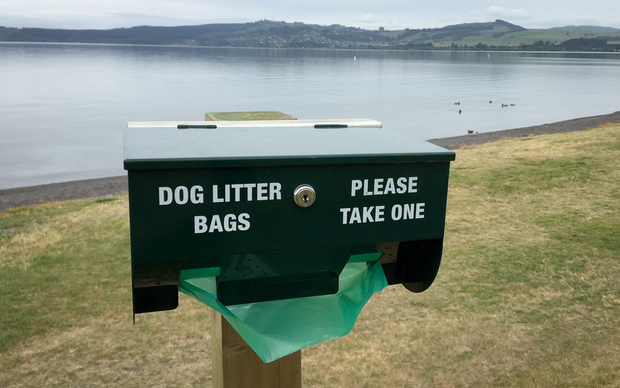 It had been an on-going issue, Wood said.

"It's not just [that] walkway. We went on another walk in our neighbourhood and we had the same issue. I'm a bit tired of cleaning dog poo of [my children's] shoes and my shoes and the car mats, our house carpets, the bike wheels, the buggy wheels. It's just a pain."

She said there were not a lot of bins for disposing of dog poo bags on the walkway.

"But I don't think it's too hard an ask for people to take the bags with dog poos home and ... put it in their bin."