The funeral for a gang leader saw one of Auckland's main roads jammed up by patched members blocking four lanes - forcing parts of Grey Lynn to close down and traffic to be diverted.

Auckland District Commander Superintendent Karyn Malthus told Checkpoint's Lisa Owen it had been a frustrating day for everyone involved.

Roads had been closed, buses diverted and parts of Grey Lynn had been cordoned off, but police were not taking a 'softly softly' approach to the gangs, Malthus said.

"I don't think that we've gone softly softly at all. You can't arrest your way out of a situation that is this large but what you can do is, you can monitor it. You can do what we did, which is about recording, identifying any infractions and following those up later."

"From our point of view, the [funeral] procession went relatively well. Yes, there were roads blocked off and we did have to employ traffic management plans, but our aim, as always, is to ensure that everyone on the roads is safe and is kept safe. And that's what we feel that we were able to achieve today."

She said with 300 to 400 motorbikes and their riders involved, it was crucial for police to maintain a strong presence, both on land and via the Eagle helicopter that hovered overhead

"...and what we wanted to do is, should there be any misbehaviour on the roads, that we could identify that and we could follow that up or deal with that as it occurs - which we have." 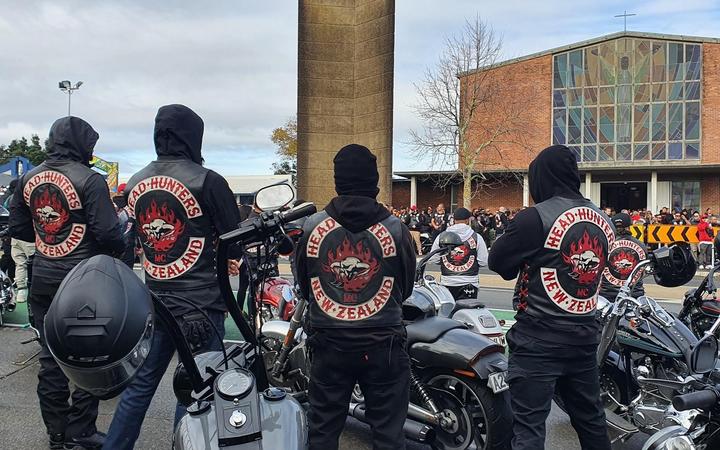 Malthus said it was not about providing gangs with police resources for a private funeral.

"It's about policing the roads to make sure that the motorists on the roads are safe and feel safe and our aim is to reassure the motorists that while this behaviour is going on, that we are present and we are policing it.

Police liaised with the dead man's family as well as gang leaders beforehand. By and large, those attending followed the road rules during their procession from the church to the Māngere Lawn Cemetery, she said.

However, police would be examining their own video footage as well as material supplied by members of the public to look for any breaches of road and traffic rules.