New Plymouth commuters could be forgiven for being a little distracted this morning - as one of the city's more notable landmarks - Len Lye's Wind Wand sculpture - dangled from a helicopter on its way across town.

The 48-metre long artwork was being returned from a maintenance overhaul and was carried to its prime spot on the Coastal Walkway.

Installed at a cost of $300,000 to coincide with the new millennium, the fibreglass pole with its clear bulb on the end has been missing from the Puke Ariki landing since March.

Pace Engineering project manager Warren Osborne explained it had been getting some TLC (tender loving care).

"Probably unlike previous refurbishments we've stripped the whole of the paint coating back to the fibreglass layers and we've recoated from there.

"We've put a new clear sphere up the top. There's a new red sphere inside the clear sphere and a new LED light."

Osborne said the $160,000 project was not without its hiccups and during "non-destruct testing" it was discovered layers of fibreglass were beginning to come apart.

"Fortunately, it was only on the top layer and it wasn't structural and it was at the end of a sheet.

"So, they have sheets that are wrapped with tape and it was just at the end of a sheet where it started to peel back and that's not bad after 20 years of service." 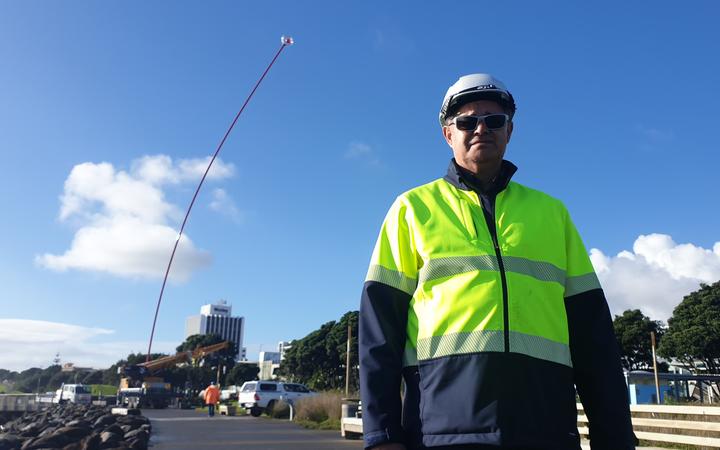 He said reinstalling the Wind Wand in its domed housing on the walkway was a cinch.

"In the first instance we brought it in via helicopter off the water, laid it down on the grass verge and we transferred the rigging from the helicopter to a crane.

"So, the crane's lifted it up into a vertical position and by the very narrowest of margins has lowered it down carefully through the bearing and into the socket down below."

Beck Helicopters chief pilot Dave Beck said he and his father, Alan, are the only two pilots in the world with experience of shifting Wind Wands.

He said moving them came with a bit of anxiety.

"If you've done a lot of lifting it's not too bad; you've just got to be careful you don't bend it or - well it bends a little bit by itself, doesn't it - make sure you don't break it when you are lifting it or putting it down." 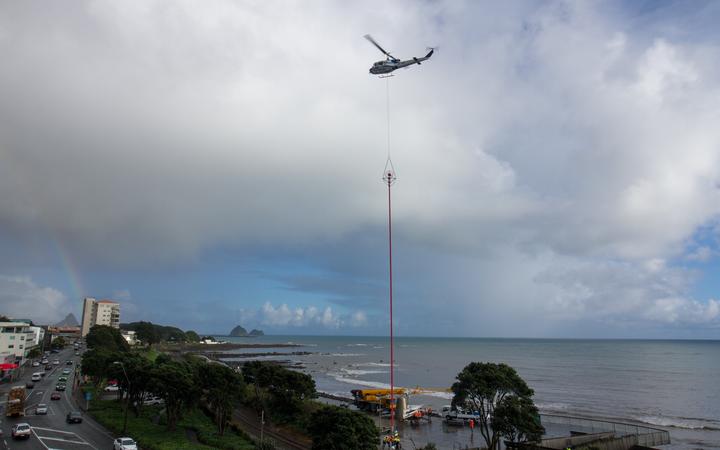 The Wand's flexibility was the problem.

"Because it's designed to bend it's not like moving a power pole or something which is a solid object where you can put the pole where you want.

"So, of course, with the Wind Wand you hold the helicopter still and the Wand down the bottom just wanders around all over the place which just makes it hard to put it down precisely."

Beck said two people on the ground were used to secure the Wind Wand before it was lowered for this reason.

Curator at the nearby Len Lye Centre Paul Brobbel was rapt to see the Wand back in place.

"It's really important to us to have the work back although it's not a work that we as the Len Lye Centre manage, that's more in the district council domain.

"But for us it is one of the great Len Lye works and for us to point our audience and visitors to New Plymouth to it, to be able to see some of Len's work outside of the gallery is crucial, because that's where the scale and the ultimate vision of Len really comes into play."

Down on the Coastal Walkway most people were glad to see the Wind Wand back.

Paul, who was jogging past, was still getting his head around it.

"I didn't know it went out. Seriously, so I didn't even notice. That's a bad thing because I think it's great."

Gayle was upbeat about its return.

"I'm pretty excited - actually we saw it being put back in this morning and so that was pretty cool."

Hannah was out cycling with her daughter and Sue who is a fan.

"I definitely noticed it was gone because I often come down here. I love that it's back. I think that it's cool."

Along with its once-a-decade overhaul, the Wind Wand is also given an annual safety inspection. 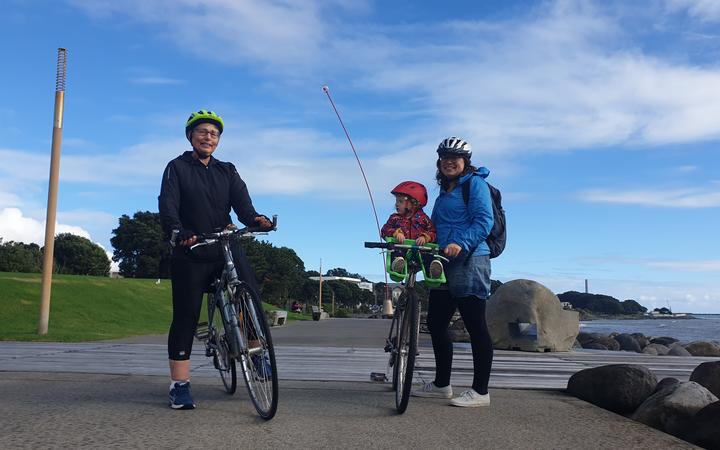