Signs in te reo in a Kāpiti Coast town have prompted a graffiti complaint to the council.

But the Ōtaki artist behind them says the real problem is racism.

Hohepa Thompson is trying to encourage the everyday use of te reo Māori, so he put a label reading rāpihi (rubbish) on the council bin outside his store, but the sticker kept disappearing and then the bin disappeared too.

"It's a part of our kind of community initiative we're running where we're trying to get more te reo into more kind of mainstream little spaces and I notice someone was taking the stickers off over a kind of three-week period," Thompson told Checkpoint.

"I had my sneaking suspicions who it was, so I kind of baited them by completely covering the sticker outside the bin from our shop and then I watched as I saw them rip it off, and then the council had complaints that they were offended by them. 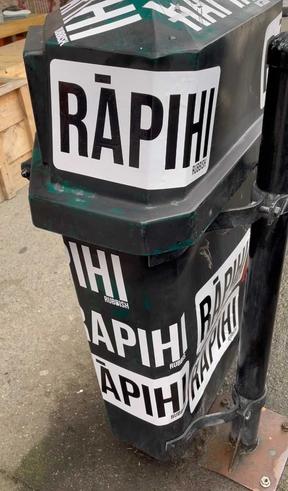 "The biggest thing that gets me is that they're offended by these stickers in our culture, but they're happy to kinda of sell taonga Māori from their store, so they don't want anything to do with the initiative, but they're kind of happy to profit from our culture."

He said when he realised what was happening, he replaced it with a stronger vinyl sticker that would be harder to remove.

"That's when I noticed there were like scrape marks and [they were] really trying to get it off so, you know, like casual racism has kind of come out as well.

"I've kind of put my foot down and said that we're not gonna tolerate it anymore.

"I think the issue is blatant racism. It's just been happening for too long."

He said he was approached by a complainant asking him why he had "keep putting your Māori stuff up everywhere."

"As an artist who puts murals up all around town and, for instance, just about to start a big one at the local school that says manaakitanga ... it's just like this is kind of my job, and this is actually what I do.

"I've grown up with this type of behavior before, but to kind of see it like and catch it out, it's hard to take, but you know some people are pretty ignorant out there. so I don't think they quite realise the actions that they're doing are racist and calling it out is something that was really hard to do. But I'm pretty glad that I did it to be honest."

In a statement, a Kāpiti Coast District Council spokesperson confirmed a council rubbish bin was removed due to a graffiti complaint.

However, the council said after an investigation, it accepted that the sticker was trying to further promote Ōtaki as a bi-lingual town.