Drysdale, 42, has dominated the single scull for more than a decade, winning gold at the 2012 and 2016 Olympics.

At the 2008 Beijing games Drysdale was suffering from a gastro bug, when he vomited and fainted after crossing the finish line third. He had to be carried to the medal ceremony.

"I'd made the decision that I'd retire in Tokyo," he told Checkpoint.

"Then obviously with what's happened this year has meant that I very much thought about it in March, and I guess my career's kind of gone on week by week since then.

"The only thing that's got me through to June rather than March is things were going pretty well. I wanted to see it to the end, but I've done that and haven't earned a spot in the team, and it's time to walk away."

He said he felt great about retirement.

"I wasn't ready to do it in March because I hadn't overcome the injury issues that I had last year. I felt like I've seen that through now... the hard thing is I'm disappointed not to go to Tokyo.

"It was never a given that I was going to go to Tokyo, because I had standards in my own head and obviously external standards to meet for Rowing New Zealand.

"So it was a pretty easy decision in the end to to finish up. I'm very proud of what I've achieved over the years, and I'm really excited I guess to watch what the New Zealand rowing team is going to achieve. I think it's going to be pretty special what they can do in Tokyo." 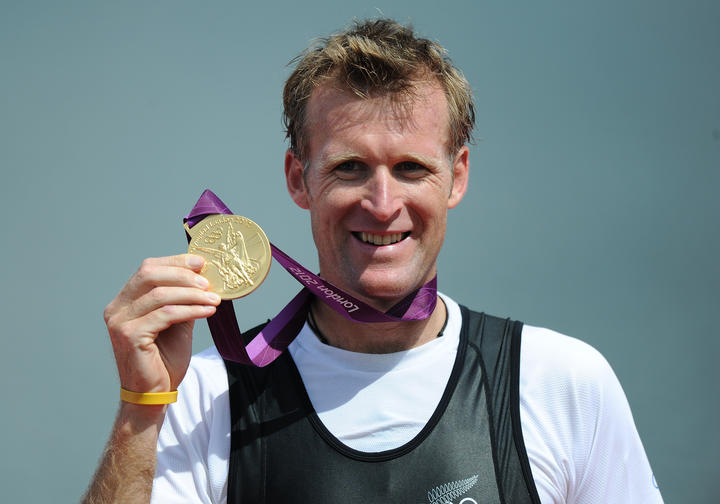 Mahé Drysdale showing off his medal after winning gold at the London Olympics in 2012. Photo: Photosport

Drysdale said the last year had been hard and after 21 years of representing New Zealand as part of the Rowing New Zealand team it was time for a change.

"I thought I was going to be finished in August last year, and as a family we had a lot of things that that we had planned to do and and wanted to do.

"Then this last year it was just battling injury, then fighting my way back. It's been quite a tough year in that respect, so now that it's over it's nice to have that end point and that new life.

"It's just nice to wake up to the kids and be able to take them to school, and do things like that.

"They've given me a massive amount over the past 20-odd years and there's a lot of people who have added to my success. It's been really nice this week just letting the important people know that I was going to step away and have those conversations with them." 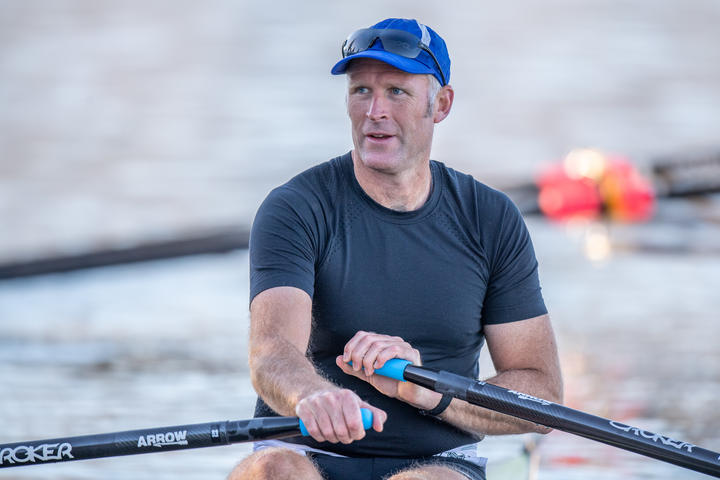 Drysdale said he was looking forward to having the time to catch up with all those who helped him along in his career, and try some other things in life.

"I absolutely love what I do and have enjoyed it. It's been tough because I've been battling my body and pushing it beyond where it wanted to go. I still had those goals, but I'm someone that's very focused on what I needed to do, and when I when I didn't achieve that, I very much switched off very quickly and moved on to the next thing.

"It wasn't a hard decision in that respect. The hardest part of this whole week was this morning going in and telling all the athletes I was leaving. They've been a part of my life for the last 21 years.

"The team means a massive amount to me, and I just have so much love for the sport and what I do. It was an incredibly hard speech to deliver to them. I didn't even get to the first line in my speech without tears in my eyes, and didn't stop for probably the next 15 minutes.

"That was hard, but there was no disappointment. It was just pure love, knowing what I've been passionate about, what I've done for the last 21 years is no longer.

"That team is so special to me and I'm no longer part of it, on the inside. Now I'm a supporter of them from the outside. It's just a change which is always hard."

Drysdale said he had shed a lot of tears, from writing his departure speech on Wednesday night to delivering it on Thursday morning.

"It was very emotional, leaving. It's almost like leaving your family behind. They have been a second family to me for as long as I can remember.

"It's pretty special. I appreciate everything everyone has done for me over the years because I couldn't have achieved half the success without them."

Winning gold in London was the highlight of his career, Drysdale told Checkpoint.

"That was my dream coming into this sport, was to win an Olympic gold medal. And to achieve that is special. That will always be the highlight of my career."