New Zealand's recycling practices are under scrutiny amid revelations that hundreds of tonnes of plastic are still being sent to countries like Malaysia and Thailand.

Concerns have been raised for years around the environmental damage caused to developing nations, who accept plastic from the rest of the world to be processed.

Last year the government announced permits would be required for exporting low-grade plastic.

So far, not one has been granted.

Recyclers here said that was because only good plastics were headed offshore, but environmental campaigners said it made no difference.

Two and half years ago, Lay Peng Pua, travelled from Malaysia to Aotearoa with a plea for New Zealanders.

But fast-forward to 2021 and her message was still the same.

"Even developed countries are not able or don't want to process the plastic [recycling]," she told Checkpoint.

Since the start of 2019 more than 10,000 tonnes of New Zealand's plastic has gone to Malaysia, hundreds of tonnes have gone to Thailand. 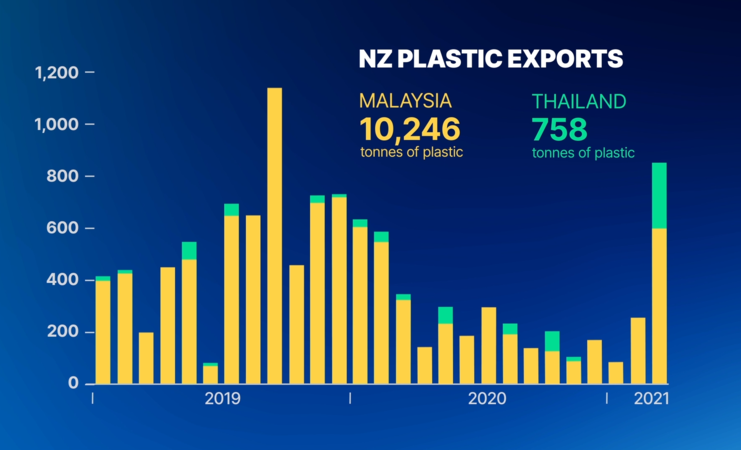 That was despite the government last year bringing in new legislation requiring permits for all exports of hard-to-recycle plastic.

So far there have only been two applications and they have yet to be granted.

So how is all of this plastic leaving New Zealand shores?

Auckland Council's general waste manager Parul Sood said: "We never send anything overseas unless [there is] a market for it, and the whole recycling market has relied on markets that can buy the product and make it into something else, so when there is no market we stop sending it."

Sood told Checkpoint the plastic Auckland was sending offshore was of high quality. It was not mixed in with low grade waste so it did not need a permit, he said.

"The problematic plastics we are collecting, but it's going to landfill. We are not sending those overseas at all. We are only sending the 1, 2, and 5 that we know there are markets for."

Those numbers are what you see on the bottom of packaging containers. Plastic types 1, 2 and 5 can be recycled in New Zealand.

But the rest of it, including sushi trays, yoghurt bottles, sour cream containers, mustard bottles - and more - simply go into the landfills.

Those "problematic plastics" were 0.3 percent of the 140,000 tonnes of recycling Auckland Council collected a year.

"They are the ones that the markets have just gone. They are just not there," Sood said.

"Unless there is an innovative idea out there to deal with them, they are going to landfill."

More and more councils are saying no to such plastics, with fewer than 10 now thought to be accepting them for processing.

Auckland Council still wanted them to go into recycling bins but currently they were going to landfill until a recycling alternative could be found.

That meant most of the plastic we are sending overseas should be high-quality, which is easier to recycle.

However, in Malaysia, Pua said it did not matter.

"It's very frustrating because we have been working so hard, and I think people still don't understand that the rubbish or so-called recycling actually goes to the wrong place."

Auckland Council is sending a relatively small amount of its plastic overseas. But it is not the only organisation doing it.

Smart Environmental chief executive Todd McLeay - whose organisation was one of the country's biggest recyclers - said there was not the capacity in New Zealand to process all the plastic waste we created, but he was confident it was being dealt with properly overseas.

"When the local producers can't take it we're stuck with it, and it doesn't happen that often, it's irregular.

"Why that matters is we're producing product to be processed to the standards that exist in New Zealand. Everybody is. That's the model here. Because you don't know where it's going to end up."

There needed to be much clearer information on packaging around what could be recycled - and where, McLeay said.

On the streets of Auckland, some people told Checkpoint they were not surprised to hear about unrecyclable plastic being sent offshore, but most were shocked and expected more clear information.

In April this year, Consumer NZ shared results of an assessment with eight other nations' consumer groups, examining the recyclability of our popular product packaging.

The research found New Zealand was the second-worst country for packaging recyclability.

In a statement, Minister for the Environment David Parker said the government was investing significantly in infrastructure to improve recycling, including that sent offshore.

That included $124 million through the Covid-19 Response and Recovery Fund on recycling infrastructure such as optical sorters and weighbridges.

"Decisions on the proposed phase-outs are under consideration and we expect announcements will be made soon."

But in Malaysia, Pua said the much easier solution to save the Earth from increasing pollution was to reduce the plastic waste we created.