A group of exasperated cyclists say they have taken matters into their own hands and put in planter boxes along one of Wellington's main commuter thoroughfares to protect bike users.

The installments are the latest in the saga for the capital's controversial cycleways, and could be shortlived as the city council says it will be removing them.

Volunteers from Cycle Wellington built what it is calling a pop-up bike lane to protect cyclists on Adelaide Road.

The group advocates for cyclists in the city, and said its work would extend the existing Island Bay cycleway into the next suburb, Berhampore.

Spokesperson Patrick Morgan said the Island Bay cycleway was pretty good, but once you left that on your bike and headed towards the city, you had no protection.

"We built the pop-up bike lane here by Wakefield Park. It's part of our cycling network but people on bikes here deserve protection. There's no neighbours or businesses that are affected by this, so what's the problem, council? Why haven't you acted on this?"

Cycle Wellington wants the council to keep the instalment up as trial for three months, with the idea of making it permanent.

"We're fed up with the council talking for years and years about improving cycling and doing so little, so as a community we're taking matters into our own hands and building a protective bike lane here in Berhampore."

However, not everyone in the community was supportive, and one passerby was less than impressed.

"No, I think it's quite irresponsible to be honest. They should've had permission before they put anything on a public road. It could just produce a hazard for other people, it might not be well lit at night time or it could be a danger to other people using the road," they said.

Jonathan Coppard, one of the volunteers involved in installing the de facto cycle lane, believed it was worthwhile.

As someone who had spent years cycling the roads he was now trying to make them safer.

"I grew up in Island Bay and I've biked this stretch since I was about 10 years old and to be honest it's always been quite unsafe. And I've learned to cope with that growing up but there's a whole lot of new cyclists on the road like people with kids on the back of their bikes, so I'm really passionate to make sure that everyone is safe to bike this road."

Wellington City Council contractors were called in this morning to remove the structures.

However, they were held off while there was an attempt to resolve the matter.

Council spokesperson Richard MacLean said the group's motivation was understood, but the instalment was actually dangerous. 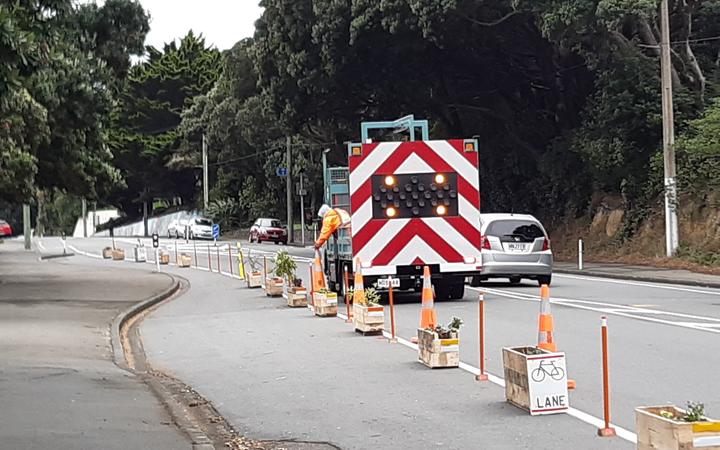 School children were seen riding close to traffic on the outside of the make-shift cycle lane, apparently confused by the new installation, he said.

"In other words it's having a counterintuitive result."

The planter boxes may also be hard for motorists to spot, he said.

Council had been working with the group for years on the cycle lanes, MacLean said.

"We can obviously spot that they are frustrated at the speed at which we're moving but the number of angry comments and complaints we've had today from people who don't like what they see who are really annoyed about the fact they've taken away parking spaces and things, it gives you an idea of the challenge we have in installing cycle lanes around the city."

While the council understood the group's frustration at the need to remove the planter boxes, it was an illegal structure, he said.