Covid-19: Does Cook Islands rely too much on tourism?

Cook Islands tourism operators are conceding life may never be the same for the island nation as it tries to bounce back from a global pandemic.

Wage subsidies and free accommodation have been offered to try to stop workers fleeing to New Zealand, but many have still packed their bags.

And the situation in the Cooks has some wondering, is there too much emphasis on tourism?

It is one down and hopefully many more to come, but Antonia Poa was pumped nonetheless.

"Getting into my computer again, I was like what is my username, what is my password? So that took a little while, then my phone rang and I took the booking, and I was like okay where does it go again? 'For how many?'

"But it was like riding a horse again, it's all good again, I'm on to it. We're running the cruise on Friday."

Before Covid-19 cut the Cook Islands off from the rest of the world, 14 people worked at Captain Tama's Lagoon Cruises, which offers a Muri lagoon cruise complete with a fish BBQ and snorkelling.

"There's five of us left here out of the 14 we did have, so we've got two around the island that went to building jobs and then there's seven that went to New Zealand," Poa said.

She said she encouraged those nine ex-colleagues, who she hoped would return some day, to find work elsewhere if it meant putting food on the table.

Staff left behind were supported by the government wage subsidy - they became builders, upgrading the company's boats and buildings.

Captain Tamas can take 120 people out on the water across its four boats, that business evaporated completely, apart from locals, some who never really have a chance to access things like this.

"We ran some schools [trips] too because kids were still out of school, so it was a good time to take all our kids out to the lagoon because some of them have never been." 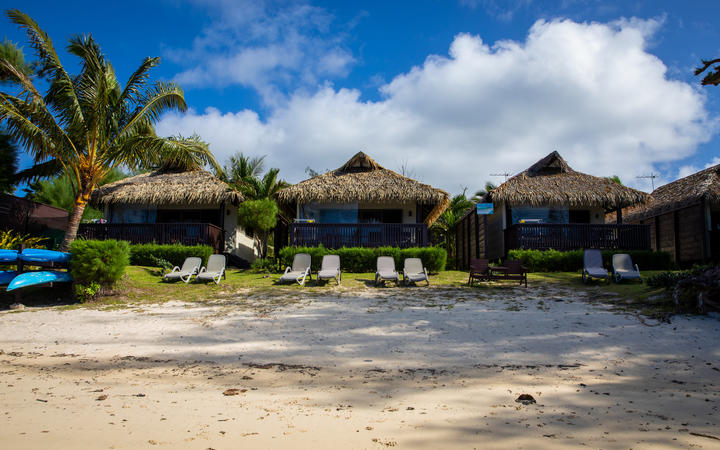 Business owners in Rarotonga are quietly optimistic their fortunes are about to change.

But, at the same time, they are realists.

Steve Lyon took a big risk by buying Beachfront Bar and Brasserie at the Rarotonga Sailing Club, right in the middle of the pandemic.

"It's never going to be back to normal, it's going to be what is the new normal in the sense of economic activity here? When we get to our seven flights a week in July, that'll be about one-third of the flights we had in July 2019. And then when we get to the summer of course with no North American link, there's questions around how we maintain our off-season or our low-season then."

Lyon said the wage subsidy had been a huge help, but it had not been enough to keep many young families on the island.

"Without access to Samoa or Tonga, as you'll be aware the New Zealand horticulture industry has been really suffering and Cook Islands has been somewhat filling that gap, and that's been a drain on us."

"It has been very low for us and there's no tourists around the island so everything for us dropped very quickly, during these times of Covid-19, so we said 'okay, what do we do next? We just hang on'," Ngametua said.

Tumutea Tours is all about Cook Island culture and education - things like cooking using an umu, coconut husking and weaving - so it relies heavily on those who aren't from here.

In the meantime, the couple have been building a new, undercover hut. Then, on Tuesday morning, finally some familiar faces showed.

"One of the families is rural New Zealand, another family they own a cleaning business in Kāpiti, and they've come many times, actually they want to move here, but it surprises us that it was a priority for them to see us," Mania said.

Cook Islands Tourism Industry Council president Liana Scott said up to 80 percent of the country's GDP was tied up in tourism and wondered if something needed to change.

"Perhaps our eggs aren't so much in one basket but we need to diversify but in saying htat, money has already been spent on the investment, the buildings, the hotels, the motels, the hosues are up, you can't just suddenly convert it to an agricultural plantations."

In the meantime, business owners are forced to tough it out, most still with a smile on their face.

"Life is good, all the time, and full of joy," Ngametua said.