A close friend of David McPhail says he felt his 'soul go back down through the mattress' when he woke to news he'd passed away this morning.

Actor and writer Peter Rowley worked alongside comedy legends David McPhail and the late Jon Gadsby throughout his career. 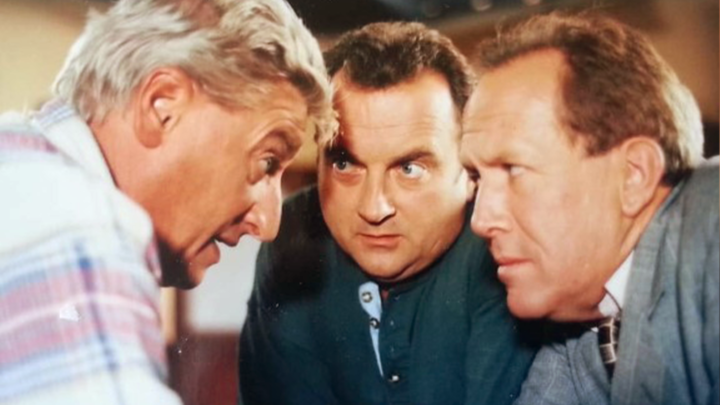 He described McPhail not only as a dear friend but a mentor and like a second parent.

David McPhail passed away in a Christchurch rest home this morning at the age of 76.

Rowley told Checkpoint of his friendship with the actor.

"I was talking to Mark Hadlow this morning and he said the same thing, that David was very, very giving. He wanted the very best out of you and he did it in such a lovely way. He became a very close friend. Both he and Anne McPhail almost like my other parents.

"They were so giving and loving, and understanding, because I was a bit of a twat when I was younger.

"They became dear friends for since and were very close.

"He trusted me that I could do what he wanted me to do with regards to the incredible scripts and directed me really well.

"Without a doubt, the mentor of my life.

"Very early this morning [Anne] rang me and informed me of David's passing.

"We all knew that David wasn't well, he was in a hospice. In quieter moments before today I would think about when he might pass, and you think you're ready for it, but a man of such stature and iconicness and closeness… God it was a jolt when she told me. I felt my soul go back down through the mattress.

"I loved him. You know, I absolutely loved that man.

"He was extraordinary, a trailblazer. He created a path of mirth and humour through a grey quagmire of politics, and lifted the psyche of this country in their thinking of both politics and comedy.

"The great thing about satire is it's good for us. We mustn't take ourselves too seriously and I think in politics it's a good thing to do.

"But there were stages when we got memos from the government saying we couldn't do stuff around elections because we had an effect.

"They realised that if McPhail and Gadsby did stuff around elections, it had an effect on the voting attitude."

Rowley said now McPhail and Gadsby have died, he might not have his old friends to play with but he's happy to play with his memories.

"I don't really do that much acting or anything anymore. And at the moment I'm producing a gin. So the thespian endeavour has 'driven me to drink' as David once said."

If he had another chance to speak to McPhail, Rowley would say: "I'm sorry David. I know I was a twat. But thank you for turning me into a much better twat.

"He put up with a lot with me. I tell you he's very patient."