A Dunedin family is pulling out all stops to find their two much-loved missing dogs. Search and Rescue has combed the area near their Brighton home more than once.

The family has put up a spotter plane and a drone, but still no sign of Scruff and Floss - two border terriers - who are parents to a new litter of six little pups.

Rowan Newman told Checkpoint her three children and their mates were playing down the back of property last Friday where Floss and Scruff were last seen at about 2.30pm.

The family is offering $1000 reward for the return of the two dogs.

"My three children had two of their friends over and they just popped down into a gully which is about 200 metres away from the house to play Nerf wars, and the dogs went down with them.

"That was the first time that Floss, the mother of the babies, had left her babies. She would go out to the toilet and then go back in to the room. So this is the first time she had a wee adventure out.

"The kids all came up at different times. None of them had the dogs, I just assumed they'd chased a rabbit and ended up the gully over Big Stone Rd, and then there's a forestry block in there.

"First thing I did was I jumped on the motorbike and went out, because they love chasing motorbikes.

"I went out on the motorbike hoping they'd hear the bike and come home, and then I just shot up the road. I kept searching up until about 10pm that night, just calling… I'd stop the bike, I'd call and then keep going. 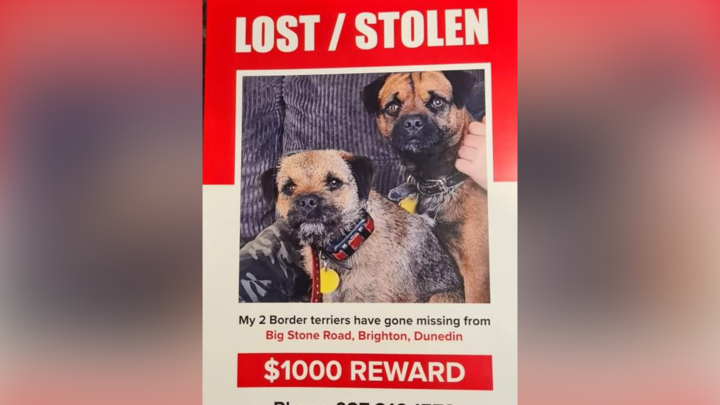 "The next day I had about 20 people in the forestry helping me look, all local. And the search has just gone on from there.

"It has just been a very traumatic time for me and the kids. Land Search and Rescue have come out, they've been amazing.

"They've gone into the forestry with their dogs, I think about 10 of them. They've been out there four times. Then people at night also from Search and Rescue have come and just walked up and down, walked through the forestry calling, getting their dogs to call, bark on command.

"My dogs - they've got great recall, so they would come. I had no worries about them not coming when I call, because their recall is so good."

Search and Rescue have had drones out scoping the landscape, Newman said.

"They're just like our family. They're my children's dogs. I work from home, and they're just 24/7 with me. And then they sleep with the kids, and my son, who's 11, it's like Scruff is like his rock, his security blanket. They just had the most beautiful bond.

"Quinn [his son] had a shepherd whistle, he'd blow the whistle and Scruff would come, so he had him really well trained.

"They were just like two wee soulmates together and I just feel so broken-hearted for my children.

"I just want closure… it's so hard to describe how much they mean. I feel like I'm constantly in a panic state like I'm just in a panic, I need to find them."

The only reason someone would take a dog like theirs would be for breeding and money, Newman said.

It has been awful for the six puppies left behind, she said.

"They howl and they make their little sounds and they're just frantic. They want their mum.

"But they miss their mum, they know she's gone, and I've just kept them together. I've kept Floss' blanket in there with them. One in particular howls, and I feel like he's howling for her."