It's over for New Zealand cricket players commentators and support staff at the suspended India Premier League, as the tournament and India Cricket bankrolls a costly mass evacuation.

It has chartered three planes to get the Kiwi contingent out. One is carrying players to the World Test Championship Final in England, but that cannot leave Delhi until 11 May.

Two other private jets are heading to Aotearoa. Trent Boult is on one of those. He will quarantine here, see family and then fly to the UK for the Championship.

The big money Twenty20 competition faced criticism for playing on, as India faced skyrocketing Covid-19 cases and a hospital system on its knees. Then some of its cricket players caught the virus.

NZ Cicket says all their players going to England are currently getting vaccinated - It hopes Trent Boult will get the Covid-19 vaccine when he returns from India.

Boss David White told Checkpoint it has been a mission to get the New Zealanders out.

"It's been complex, especially you know the last 48 hours when the tournament was cancelled, working in different time zones with within the IPL franchises and the players, but we've got there.

"Everyone's work really hard to get a solution so all our players can ever safely exit out of India." 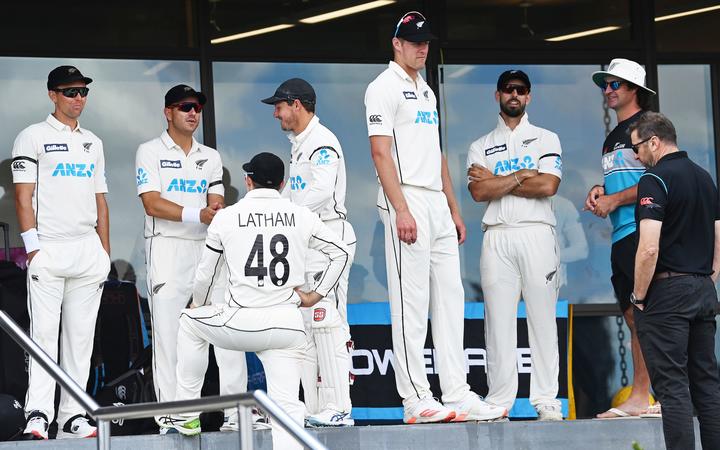 The Black Caps wait during a break in play at the Bay Oval. Photo: Andrew Cornaga/Photosport

He says there will be two charter flights with each leaving New Delhi on 7 May with nine passengers each including players, commentators, umpires and coaches.

On 11 May another charter flight will travel from New Delhi to London with Kane Williamson, Kyle Jameison, Mitchell Santner, and the team's physio.

"I'm not sure where the plan has come from but that's what the BCCI (Indian Cricket) has organised with the franchise."

For the four that need to wait until 11 May, White says they have a private wing in a hotel in New Delhi and will be able to keep to their own bubble and will be tested for Covid-19 every day.

In the worst case scenario, if one of the players or crew returns a positive test, they could be stuck in New Delhi for a longer period.

"We've had great support from Indian Cricket and the franchises. We've been working closely with them. That's an obstacle we would have to overcome at the time and hopefully it won't happen."