Three-year-old boy Axle was found alive and well more than 3.5kms from home, nearly 22 hours after he went missing. His dad tells Checkpoint how the support of their new community helped get them through the cold night.

The toddler wandered off from his Mangatuna home near Tolaga bay at about 1pm on Tuesday, wearing his shark gumboots, a nappy and a T-shirt. Overnight temperatures in the area were around 7C.

Nobody knows Axle's exact route, but he had gone several kilometres over rugged terrain.

"It was unreal. I expected him to be dead," his father Glenn told Checkpoint.

"When your child goes missing you can't sleep, you can't get warm. Every time you get cold you go to put a blanket on, you think how could I do that when my child's freezing? That's what happens.

"He's three years old in a nappy and t-shirt. Like I've said to everyone, if that was me last night in my undies and a t-shirt I would be dead. I'm not joking saying that. I don't know how he did it."

The parents were reunited with Axle after he was found at about 10:45am on Wednesday. "I just told him how much I loved him," Glenn said.

"He's full on, in a good way. The first kid I've ever met at two, three years old to say 'you're welcome' when people say 'thank you'. He's got the manners of an angel. But he's a pretty rough little unit too.

"We just asked him what he was doing all night, he said he walked a lot. He fell down a bank, the pigs didn't find him, he slept up a tree, and he slept with some bunny rabbits."

After a stressful and sleepless night Glenn said he's trying to wind down but it is a struggle. He's grateful to the hundreds of people who helped in the search.

"What sort of thanks do you give to people who… they've saved my son's life. This community is awesome. We're only new to this community. If half the country was as good as this community, it'd be a pretty sh*t-hot country.

"People care here, and you can feel it. There's a difference."

He said he was lucky enough to give searcher Peter Hughes a big hug and a thank you when he brought Axle home.

"I know somebody who knows him, so I'm hoping to catch up and buy him a box or two and have a couple of beers with him, that's for sure." 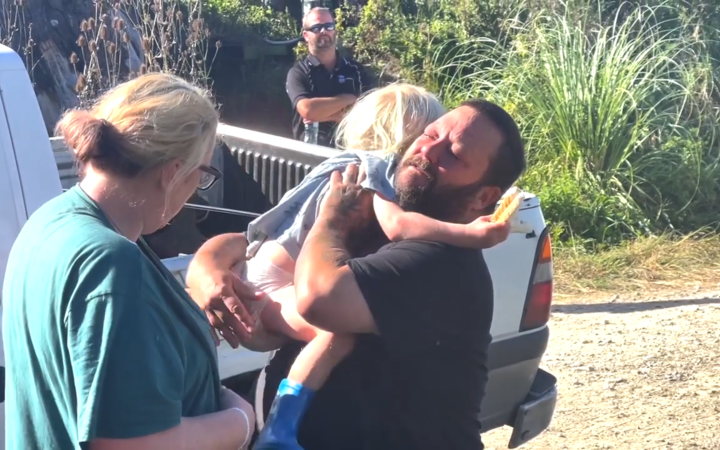 Hughes told Checkpoint he had combed the river and obvious spots near the house, but he followed a hunch and headed kilometres up a track into a forestry area, where he found the boy.

"He's the best little bloody fella out really. He's done very well - in the bush all night. But no, he was sitting in the gully when I was calling out, and I could hear a kid calling out from way over the other side.

"So I thought I'd go have a look over there and sure enough he came out onto the track way up the top.

"He'd come up from out of the gully, on the side of a hill."

Hughes said Axle was wet and very hungry. "All he wanted to do was get to his mum.

"It brought tears to my eyes. I don't wish that on any parent losing especially a young one out in the bush.

"He's a tough nut. We breed them tough up here.

"He was looking around for his mum so I said to him, 'come with me I know where your mum is'.

"I've got three children of my own that I'm looking after. I went to drop them off at school this morning then went up to look for him.

"We couldn't find him last night. So we hunted for him along the river this morning and then I thought, sh*t he's got to be way out if everybody's around here looking for him.

"He was about 3.5km from the house," in rugged terrain, Hughes said.

"Trees that have fallen down and they've planted new stuff, so there's a lot of debris around that he must have gone through.

"He must have walked a fair way, there was a helicopter looking around for him this morning. I'd gone along the river, hunted all along the river… I'd bumped into quite a few searchers, and I thought sh*t, if we can't find him around here… about a kilometre away from the house, he's got to be right out.

"So I jumped in my truck and drove up on big long track way up to the top of the hill. He was way up the top."

When Hughes found him, he called police constable Richard Reeves and then headed down to Axle's family house.
He said it was an emotional moment for the parents seeing the toddler home and healthy.

"It's the best thing anybody could ask for isn't it? It's better than winning Lotto."