Auckland Zoo does not believe its appeal will be diminished by the loss of its two lions and the planned departure of its elephants.

It says it was forced this week to make the extremely tough but kindest decision to euthanise elderly lions Zulu and Malik on welfare grounds.

The half brothers were both suffering from degenerative bone and joint diseases, to different degrees.

The zoo is also soon to lose its two elephants Burma and Anjalee, who are being rehomed so they can be with a family herd.

Auckland Zoo head of animal care and conservation Richard Gibson told Checkpoint the decision to put the lions down was necessary and much more humane a death than the one they would have faced in the wild.

"These animals live much longer lives than they would have lived in the wild," he said.

"You have to remember that we tend to have very romantic notions about the wild and most of those are unfounded.

"Life in the wild is hard and cruel and it is harsh and lions would never reach this sort of age in the wild ... the death of any animal, particular a predator, in the wild is usually long and drawn out and painful, through starvation and injury, and eventually if they're lucky they might get killed off by another predator. 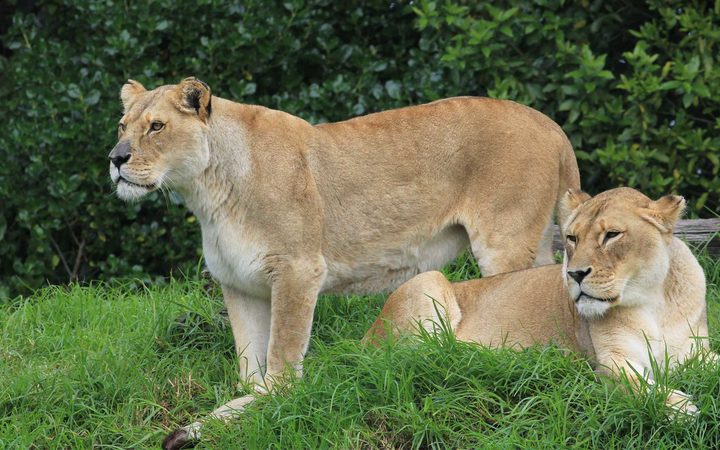 Elderly lions Kura and her daughter Amira had to be euthanased this morning at Auckland Zoo. Photo: Supplied/Auckland Zoo

"But very commonly, it would be a slow deterioration over months or years and so what we have in a zoo environment is obviously best husbandry, best practice veterinary care so that their health and their behavior and their diet and their nutrition are all looked after, so they have a very positive experience during their lives.

"Their health and quality of life is as good or better than it would be in the wild. We, through a proactive positive management, avoid having a slow, arduous and painful death at the end of their life."

The zoo anticipates it will have lions again, but when that would be remains uncertain, as animal movements are determined by other institutions.

"I can't put a finger on it but it'll certainly be months because it takes a lot of planning to move animals around, even within a country but certainly across countries, and all our animals are part of international or at least a regional Australasian breeding programmes, so it's not so straightforward," he said.

Any decision to house animals and enter breeding programs was based on genetic and demographic considerations, he said. The zoo collaborated with other zoos and was part of associations like the Zoo and Aquarium Association of Australasia, to make sure animal populations were maintained as healthily as they could be in the long term.

The lions and elephants were a huge attraction for the zoo, but Gibson said the other resident species offered more than enough attraction for visitors. The more unusual, less unknown animals were just as able to captivate an audience.

"We have 140 other species that Auckland Zoo, many of which are what you might put in that bracket of being an attractant. For instance, the orangutans and giraffes and rhinoceroses and things like that.

"We have a pretty diverse and the largest, most diverse collection of animals in New Zealand ... it's also important not to forget some of the ... smaller, maybe more obscure [animals] and the stuff that flies below the radar that actually people really fall in love with."

There were native species at the zoo too, including geckos and skinks, and the critically-endangered black mud fish, endemic to the north part of North Island.

Some would the concept of a zoo as a type of institutional animal cruelty, but Gibson strongly disagrees, especially because many animals face a bleak future in the wild.

"I would say there's never been more of a need for zoos," he said.

"The good modern zoos of the world, like Auckland Zoo, are not for profit. We're not doing this for commercial reasons. We have a mission that is based on education and advocacy and conservation and science.

"One of the principles that we operate by in all that we do is best-practice husbandry, based on scientific science, scientific principles, and on absolutely positive welfare for all our animals across all the different experiences that our animals have in the day.

"Whether that's their behavior, their diet, their nutrition, their actual physical health, their social needs, their environment.

"We monitor and measure all of those things to ensure that they are experiencing positive long term with their lives with us."