Undersea robots have been collecting new data from deep under the ocean floor to better understand earthquakes like the one that sparked tsunami fears this month.

Called "ROPOS" the state-of-the-art remote-controlled vehicles have also been exploring areas off New Zealand's coast never before visited by humans.

The project is a collaboration between New Zealand and US scientists onboard NIWA's research vessel Tangaroa which docked in Wellington this morning after weeks at sea.

The Hikurangi fault line off the North Island's east coast poses a huge earthquake and tsunami risk. Shakes there and in the Kermadecs this month led to a series of tsunami warnings, forcing tens of thousands to flee to high ground.

Dr Laura Wallace from GNS Science worked in the team measuring whether a tsunami wave had been generated after the quakes, and said the data they could gather was impossible to get by measuring from land - away from the action.

"It's really all about trying to understand what this sleeping giant underneath us is doing, which is very hard to do when so much of it is offshore.

"So you [have] really got to turn to offshore methods and be collecting data in the offshore region."

The data will give scientists an unprecedented look at the relationship between the shakes we can feel and what's called "slow slip" earthquakes that can happen over weeks.

She said the quakes were scary but scientifically exciting, because she knew the observatories would be picking up all sorts of fascinating information.

"So it was simultaneously really stressful .... but [I was] also kind of thinking forward to how cool it's gonna be to get that data and get a little more information on what happened out there."

The project's a collaboration between GNS Science, NIWA and the University of Washington.

Washington University associate professor Evan Solomon said it had been an incredibly difficulty project to pull together.

"Of course, we couldn't predict that there was going to be a pandemic.

"For the past year it's been a major effort to clear a bunch of hurdles to make sure that this cruise happened and was successful.

"It was an incredible amount of work, I've been doing this kind of thing for about 20 years now and by far this was the most challenging to pull off."

He said the remotely operated vehicles had arms that could gather samples of rock and organic material, and a camera that captured some incredible footage. 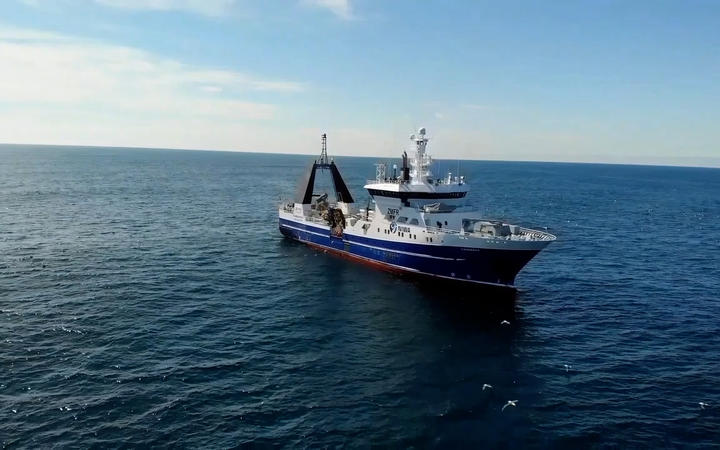 The underwater vehicles went as deep as 3.6km below the surface. At that depth there is absolutely no light but there is still life.

'Cold seeps' - in fault zones - are like an oasis in the desert.

Microscopic organisms live there, converting methane and other chemicals venting through the seafloor into energy - acting as the base of the food chain for larger animals.

NIWA microbial ecologist Sarah Seabrook said the remotely operated vehicles went places never before visited by humans - including a seep site off the coast of Kaikōura.

"You see crabs, you see see stars, you see sea cucumbers. And then once you get to the centre of the seep you see specific animals such as these large tube worms - which can be taller than me sometimes.

"You see clams, you see mussels, you see microbial mats, and you see these huge carbonate platforms which attract a lot of other animals."

His work looks at the fluid that lubricates faults - not enough of it can mean the plates become stuck, causing pressure to build up which can trigger large shakes.

He said he would now head back to US and analyse the data to work out what effect the fluid was having on faults near New Zealand.

The remote-controlled vehicles also explored the Bennett Knoll seamount, a large undersea mountain located off Hawke's Bay about 2500m below the sea surface.

It is hundreds of metres high, was created during volcanic eruptions that occurred over 80 million years ago and is now home to a diverse ecosystem.

The team was also able to get an up-close look at the Boo Boo Fault - the most active fault in the Wellington region in the Cook Strait.