Her height - or lack of it - is what initially stopped Lynda Perry signing up for the police, but age has not been a barrier for officially the oldest "new" constable to graduate police college.

Perry, 57, has finally realised her dream of putting on the blue uniform 40 years after she first tried to sign up. She told Checkpoint it has been a long time coming.

She first tried to sign up in Whanganui in 1981 when she was 18, but at 1.64m did not meet the height criteria of the time and was told on the spot she was too short.

She applied again in Auckland, when she had a two-and-a-half-year-old son and said this time she got a bit further, passing the physical tests, but then failing the maths component of the test which, she laughingly said, "didn't surprise me at all".

Perry said she left it for a while at that point after it all got a bit hard as she had no family support in Auckland.

"But honestly it just kept eating away at me, it was like it was a big regret and as time went on I thought, you know, it's just too late. And I just thought, yeah, I'm too old for this now. I didn't feel too old, I just thought they wouldn't consider me."

Perry said she had read a couple of years ago that Constable Susie Weeks had graduated from police college in her early 50s.

"I couldn't believe it, so I just applied then and there that day, and then that's what set the ball rolling."

Perry said although the fitness test was not easy, it had never been a problem for her and it was just important to train for it.

"This time it was fine, yeah it's not easy, you know you've got to do a reasonably fast run within an amount of time, push-ups, jumps, that kind of thing." 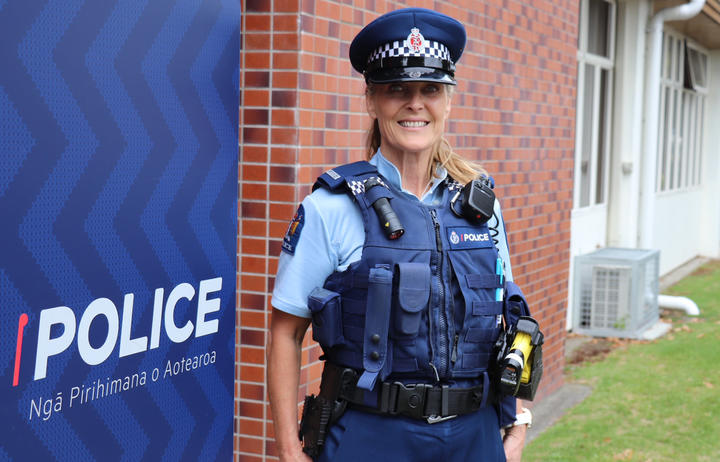 Lynda Perry, 57, said the physical fitness test required to get into the police force was difficult, but had never been a problem for her. Photo: Supplied / NZ Police

Perry said the academic side of it was the hardest part for her.

"I'm not used to studying, and I never was even at school ... but if you want it hard enough you just work hard, you really have to."

Perry said the make-up of her class was diverse - the youngest person was 19 years old, 55 percent were female and there was a huge range of nationalities. All had different strengths, some were great communicators, others were good at studying or doing role play.

She said some people in their 50s who wanted to join the police in their youth may not realise that it is still an option.

"I think a lot of people have just given up a little bit like I had. I couldn't, I couldn't get rid of that feeling that I really wanted to do it. But it wasn't until I saw that I actually thought I can do this and that I actually went for it again."

Perry said she thought her previous experience as a real estate agent would help her in her new role, as it was still about dealing with a lot of different people in sometimes stressful situations.

"They were in different situations, you know, whether they were dealing with grief or they didn't want to sell their house - that could be mortgagee - so you know you have to be able to relate to people. So that side of it actually transfers over really nicely I think. So I think that experience has helped me, or will help me."