Supermarket staff are among the essential workers that stayed open through all of the lockdowns and elevated alert levels.

Countdown stores have regularly featured as locations of interest - where customers have visited while infected with Covid-19 - unwittingly putting workers at risk and under stress.

Countdown spokesperson Kiri Hannifin said she expected most staff, except those over 70 or with underlying health conditions, would be in the last group on the priority list.

"We totally support that the government prioritise border workers, their families, healthcare workers, our elderly and our most vulnerable. That makes complete sense to us.

"But I guess… I do think that there are parts of our business and some of our team who we think are essential workers, that we think are on the front line, and we think should be prioritised as well.

"That's because there are some of our stores most New Zealanders know about that have been susceptible to Covid-19 visits, including our airport stores. 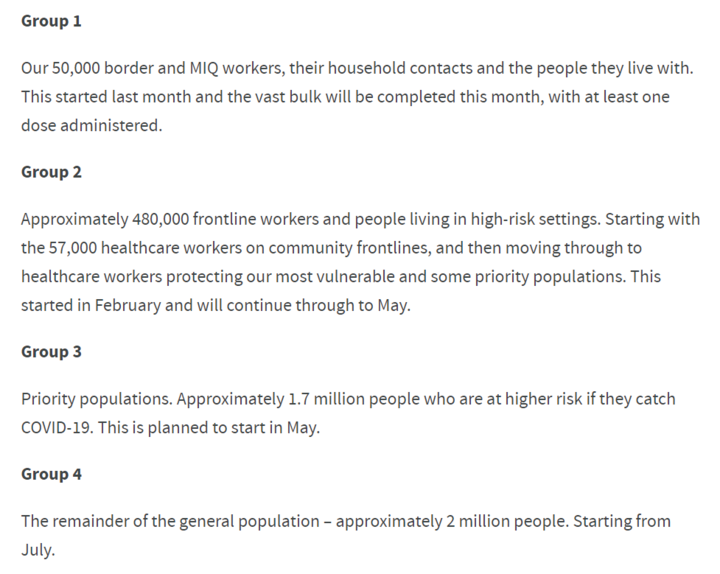 "But also we've got infrastructure in our business like distribution centres that, if Covid-19 did take hold in those, would really jeopardise the supply of food across New Zealand.

"Our checkout teams who are absolutely on the front line in those stores are at risk, I think, more so than some other general New Zealanders.

"For those reasons I think, and for the enormous ongoing stress that it's caused many of our team. Of course I'd advocate that our team are prioritised in some way, or at least some of our team."

Hannifin said the vaccination priority list made sense until you got to the "remainder of population" section, but she would like to see those workers who face customers the most or those involved at distribution centres being higher up the list.

"It's very hard work, operating during Covid-19 restrictions. It's really hard work, it's relentless and it's tiring… it's difficult dealing with customers and we see a lot of aggression, more than we usually see.

"It is very tiring, it's very tough, and also our team is scared.

"Last week during [alert level] 3 in Auckland we had our highest levels of absenteeism we've ever experienced and that is absolutely down to exhaustion and fear.

"We don't want to push ahead of our place, we know what's right, but I would really support some of our team at least being considered to be a priority."

Hannifin said she would not expect supermarket staff to be prioritised above the elderly, but would like those front line workers to be above the two million "remainder" group.