It's not a typical Christmas story but arguably it involves grinches, what some may describe as a miracle, and even a touch of redemption. 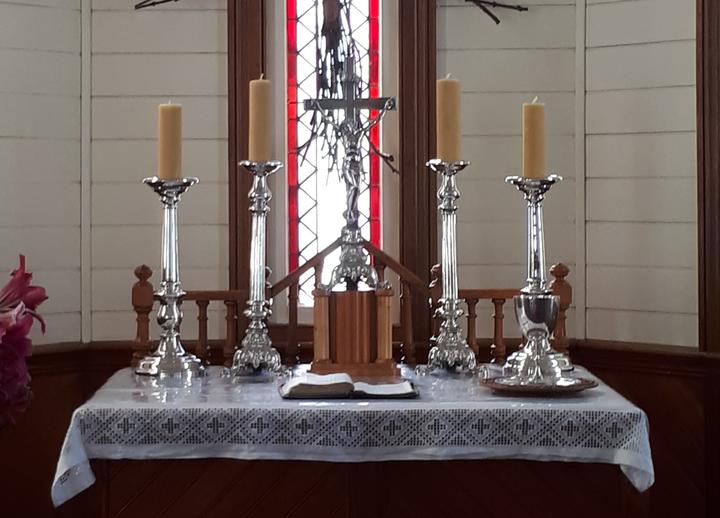 On Sunday thieves stripped a church near Nelson of all its precious items - everything from the sound system to the communion plate and even a Gottfried Lindauer painting.

Pieces of the ceiling were left hanging after the burglars tried to pull the heaters down.

Pastor Andy Marr of St Paul's Lutheran Church in Upper Moutere turned up ahead of Sunday service to find the ominous sign of a door ajar and the church picked over.

"What we have been left with are the church pews which are very heavy, the organ and the piano," Marr told Checkpoint early on Tuesday.

"For us, the biggest tragedy would be that some of those things like the paintings and the wood carving be just destroyed – chucked on a bonfire because you can't find anything else to do with it," he said.

Following that interview, Pastor Andy Marr called Checkpoint back with some news.

"I noticed quite a tall man, a skinhead in a death metal t-shirt ... I went out and met him and he asked me if I was involved with the church. I said yes I was the pastor, and he said, 'I think I might have some stuff in the back of my car that belongs to you'.

"So I walked with him over to his car and he opened the boot, and there was our stuff.

"All the silverware was just stacked in the back of the car and the sound system was there. The only thing at this stage I can see that is missing that was really of value to us as a people is the Graham Pizzey carving."

Marr said he was blown away to see the valuables, including the Lindauer painting, returned.

"All the communion chalices and plates and all that stuff is here. The painting doesn't have its frame anymore but is intact and doesn't look damaged in any way."

He does not think the man who returned the items had anything to do with the theft.

"He just shared that a friend of his had had a rather wild night on Saturday night and had been picked up when he was hitchhiking home and ended up by being with the guys who were involved in this theft.

"They then beat them up and left them on the side of the road, basically. But he had a memory of where the things we kept. And the man who came out didn't want his friend to get in trouble with the police, so thought he would go and pick these things up and return them to us," Marr told Checkpoint.

"It's absolutely fantastic. It also goes to show that you know God works in mysterious ways with mysterious people."