Aucklanders are being urged to raise Covid-19 testing rates over the weekend to ensure the city is on top of its latest outbreak.

The proof that the two cases have the same genomic sequencing suggesting a direct link between the Defence Force worker, known as Case A, and the Auckland student (Case D) meant the outbreak was not similar to the August outbreak, he said.

"We basically picked up the August outbreak probably two to three weeks into that outbreak whereas here we're looking at a transmission that probably took place some time last week.

"So that's telling us that there are probably not a large number of other cases out there and that's good news." 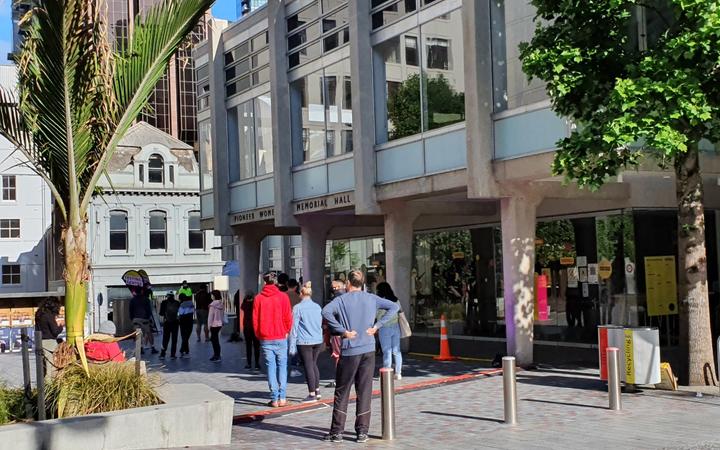 While the link was not 100 percent guaranteed, the timing of symptoms suggested there was no intermediary.

Somehow during the time Case A was in the Auckland CBD, there must have been some sort of casual contact with Case D. Other people who had been in the CBD during this time needed to be vigilant as well, Prof Hendy said.

"We do need to keep those testing rates up, locate those cases if they're out there and make sure that they're in isolation and not out there spreading the virus. But it's not the worst case scenario."

There was still some risk, Prof Hendy said, but staying alert, using masks and the app and higher testing, especially if anyone felt unwell, would be crucial.

"Let's get those testing rates up above 10,000 over the weekend - I think that would be great."

Masks are now recommended for public transport in Auckland and flights nationwide and on Monday Covid-19 Minister Chris Hipkins will seek Cabinet approval for these measures to be mandatory.

Prof Hendy said mask wearing might be inconvenient, but it was preferable to going into lockdown or other forms of disruption.

He would have preferred to see this brought in earlier, especially after the August outbreak.