A Meridian Energy TV ad featuring the trials of a Kiwi 'eco-hero' has been ordered off-air after it was found to make misleading environmental claims.

Rival power company Electric Kiwi complained to the Advertising Standards Authority about the ad, titled 'For Power That Doesn't Cost the Earth', saying its claims were unsubstantiated, and the power Meridian sells is no greener than anyone else's.

The ASA has ruled in its favour, demanding the ads be pulled immediately.

In Meridian's latest advertising campaign, Nigel is a stereotypical Kiwi bloke helping to save the planet. He refuses to use plastic bags for his fruit and vegetables, turns down straws for his smoothie, and goes as far as using his beanie to scoop his dog's poo. 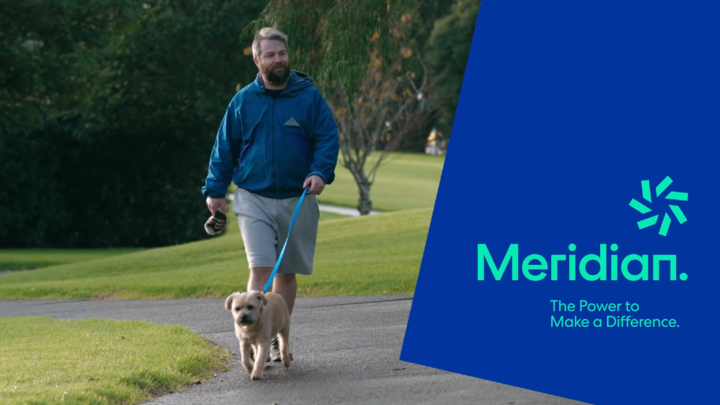 But it's the ad's final plug which sparked outrage in the power sector.

"Doing your bit for the environment just got easier," it says, encouraging people to switch to Meridian.

Rival power company Electric Kiwi cried foul over Meridian's ad, and an implication that customers would receive renewable power by switching to the company.

"It conflates the generation with what retail customers might receive through their lines. There's just no way that a retailer can make any claim about the source of the energy that's delivered," Electric Kiwi chief executive Luke Blincoe told Checkpoint.

"So we felt that's both misleading in terms of what it can deliver, but also greenwashing to suggest one retailer's energy might be greener than another's."

Blincoe went to the Advertising Standards Authority to argue that while all of Meridian's energy is generated from renewable sources, that's not true of the power it sells - that's mixed in with power from coal and other non-renewable sources.

"I think they were looking to appeal to Kiwis with a strong sense of environmental responsibility, and we think it's really unhelpful to create those sorts of perceptions when in actual fact switching retailers won't change your carbon footprint. How you use energy is really the only way to change that," he said.

Meridian defended the claims, saying consumers would understand the advertisement's claims as a reference to Meridian's well-documented renewable energy generation capabilities, and they would not assume Meridian adhered to an environmentally sustainable model in every aspect of its business.

But the Advertising Standards authority rejected that.

"The electricity customers buy from Meridian, or any other retailer, is all sourced from a 'pool', generated by both renewable and non-renewable methods. Therefore Meridian cannot make an environmental claim about its retail electricity product.

Ethical marketing company GoodSense's managing director Kath Dewar says it's a case of Meridian wanting to have its cake and eat it too.

"Rather than telling a full picture, what advertising tends to do is tell a part picture. So what has happened in this instance is that Meridian have told the glass half full story, but they haven't told the half empty story, if you like," she said.

She said people need to be wary of greenwashing in advertising campaigns.

"New Zealanders are more demanding than ever that the companies they buy from do right by nature, and people. And companies know they can make money out of that, but what we have is a tradition of advertising which is to always emphasise the positive and not be candid about the negative."

Checkpoint invited Meridan to be interviewed, but it declined.

For the ad starring Nigel, his eco-warrior ways are on hold, with the Advertising Standards Authority ordering the ad to be pulled immediately.