What next for Trump with Covid-19? US doctor explains

During his hospital stay, US President Donald Trump has received experimental treatment not yet available to others infected with Covid-19 and a cocktail of drugs that doctors believe may never have been used in combination before. 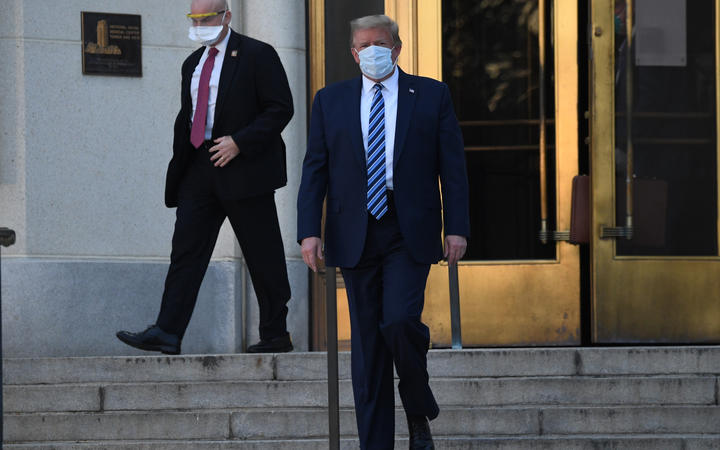 The 74-year-old has been undergoing an intravenous course of the antiviral drug Remdesivir, as well as steroids usually given in severe cases and an as-yet unapproved antibody therapy.

The arsenal of treatments has raised questions about how ill the president is and whether he should be leaving hospital given the potentially serious side effects of the drugs.

She said Trump returning to the White House does not mean he is out of the woods.

"Any physician who has treated patients with Covid-19 knows that the worst of the illness rears its head, somewhere between five and 10 days after diagnosis.

"That's when that cascade of immunological measures kind of releases itself and creates trouble breathing, creates strokes, creates heart damage, and that is what we're all worried about with the president.

"He certainly went through some tough days early on, but we fear that the worst is yet to come.

"The president certainly has access to a different level of care than any other person in the United States. I find it completely believable, that they can provide excellent almost hospital-level care at the White House.

"So it may be safe for him to be out of the hospital and back at the White House with the condition that it's absolutely essential for him to continue to maintain isolation so that he does not infect others.

"And that's the thing that worries me the most about his leaving the hospital. We've already seen him taking off his mask. He potentially puts others at risk by leaving at this point," she told Checkpoint.

"I would never discharge an average person home on day four of Remdesivir, first of all you have to finish those IV medications. Second, you need to be closely monitored for potential side effects. And third, if he was sick enough to get admitted to the hospital, if his oxygen levels were low, presumably he was having trouble breathing, even if he didn't feel short of breath, he deserves additional monitoring to make sure that he's truly getting better and not getting worse.

"They may be able to provide some of that at the White House, but only if they can keep him on isolation, keep them safe from others, and for the average person that simply would not be an option.

"The president has received three medications that together, to my knowledge, have never been given to anyone else in the world. They've been given individually but never as a combination.

"So his treatment can't even begin to compare to what's available to others. Of course there are also so many problems with our American healthcare system that make his course, really, incomparable to that of the patients that I treat in my emergency department.

"Most of my patients still face difficulties getting tests, they would have trouble getting access to an oxygen monitor, a home pulse oximeter to track their course if they went home. Many of my patients have trouble paying for their medications, much less getting access to experimental drugs that aren't normally available outside of a clinical trial.

"So there are a lot of things about his care that are really only available to the president of our country. And part of what makes me nervous when he says Covid-19 is no big deal - he's gotten really special treatment, hopefully it will make him better, but what he has experienced is not what the average patient with Covid-19 experiences.

"We know in medicine that there's something that we call VIP syndrome, where patients who are perceived as special or powerful receive extra treatment above and beyond what we would normally offer based off of the state of the evidence.

"I worry that he could be receiving that. That he's getting medications that may not be indicated, or getting extra medications that have not yet been proven. And those can have side effects. So yes, he could be serving as a guinea pig. But I hope that they'll help him because goodness knows we need a, for better or for worse, he is our president, and we need him to be okay.

"I can say that some of the medications that he's getting, particularly dexamethasone, are known to have side effects such as mania, delusions, psychosis, euphoria.

"He tweeted today that he feels like he's 20 years younger. I can't help but think that that's the dexamethasone talking, certainly not the Covid-19 which we know causes long-term effects.

"I'm not in a position to judge whether he's capable of running our country. But I do have concerns about what he said in some of his tweets today."

Ranney said she has a lot of concerns about Trump's message to not let Covid-19 "dominate" people's lives.

"I and many, many others have spent the last eight months trying to communicate to Americans, both the risk of Covid-19 and the steps that they can take to prevent transmission to themselves, to their family to the larger community.

"I worry that that tweet is going to undo everything. Or, much of what we have fought for, for the past eight months, and put many more Americans at risk of illness and death.

Ranney told Checkpoint the critical days in Trump's progression with the virus will be between Thursday and Monday.

"We're going to be watching for those signs of that inflammatory cascade that can cause so many of the most feared negative effects of Covid-19.

"The data shows very clearly that for patients who are sick enough to be hospitalised with Covid-19, as many as 75 percent of them experience long-term effects from Covid-19 - problems with lung function, neurological problems, problems with long-term fatigue.

"Moreover, we know, as a physician, even taking Covid-19 out of it, any patient who's experienced a serious or potentially life-threatening illness should conserve their strength, should rest, get plenty of sleep, eat well, not strain themselves in order to heal more quickly.

"Going right back on the campaign trail strikes me as, not just potentially harmful to him, but also, again harmful to the larger community.

"My first and biggest advice would be to wear a mask, always. My second would be to follow those isolation procedures until he's at least 10 days after his diagnosis, so that he avoids infecting not just his colleagues and friends, but also the staffers at the White House who have potentially put their lives on the line for him.

"And then the third piece of advice would be to take it easy. Vice President Biden has done a wonderful job of virtual campaigning and virtual rallies.

"I understand that we're in the midst of a campaign. But President Trump can find ways to do that without putting his own health and strength at risk."