The first thing I noticed was my hands. Smooth, tanned, digital, and able to pull me around this dark space I'm suspended in.

Raqi Syed gives me a quick tutorial on how they should move, then backs off and sits at the back of her room with her husband, Aretio Echevarria.

For the next 20 minutes I'm no longer in the room with them, but suspended in a virtual world they created at the Miramar Creative Centre - part of Victoria University.

Three years were spent designing each micro-second of this 20-minute short film, with the help of a small army of other artists.

Diffused bouncing on to mid-century furniture, a native bird print on a bathroom wall, a scuffed curb at an airport - each minute detail has been considered and I can take a closer look or spin a scene around when I get nosy.

Called Minimum Mass, the film is about a couple trying to conceive.

I witness painful scenes in bathtubs and a doctor's office as the couple deal with grief and reflect on what is holding their relationship together.

This isn't just the couple's world - it's their story.

Before they embarked on this project, Raqi Syed and Aretio Echevarria suffered three miscarriages.

Syed said immersing themselves in the subject for the next three years was like going through extreme therapy.

"It is very intense and emotional, and I think that has caught up with us at different times throughout the making of this project. The need to share the actual emotional journey with key creatives and stakeholders so that they understand what we're trying to do and come along with us - it's been tough."

Echevarria said they wanted to tackle a taboo.

"I think one of the original motivations was because it's a topic that's not really talked about much in society, particularly with men. It's something men don't talk about almost at all. So we both thought it was a really valuable conversation to have."

He said their own story has a happy ending - now they have a healthy toddler son - but the film remains "relatively dark".

They completed the project in February, just as Covid-19 began affecting a long line of international film festivals where Minimum Mass was due to play.

Artists can spend years trying to make the selection - and cancellations would mean they may not get to show their work for years.

But hope arrived in the form of Oregon's Rene Pinnell, the chief executive of Kaleidoscope, a network for artists working in VR.

He usually runs events in the real world, but was tasked with finding a virtual venue for the Cannes film festival, Tribeca, and VRHAM - a virtual reality festival in Hamburg - so anyone with a headset could attend.

It meant people could see Minimum Mass from their own homes.

Pinnell said a key to making the virtual festivals work was finding the right venue - much like the real world.

"When we did physical events we'd spend tonnes of time researching and looking for venues that would inspire people and make them want to engage with one another. If it's in the wrong space - in a drab convention hall, it sort of frames everything in a different light that we're not so jazzed about.

"To be frank most spaces online that are being built for VR are aesthetically really painful.  They're places I'd visit and be like 'I can't wait to get my headset off. This is really - it's hurting my eyes and my delicate artistic sensibilities'. But, we eventually found a place called the Museum of Other Realities." 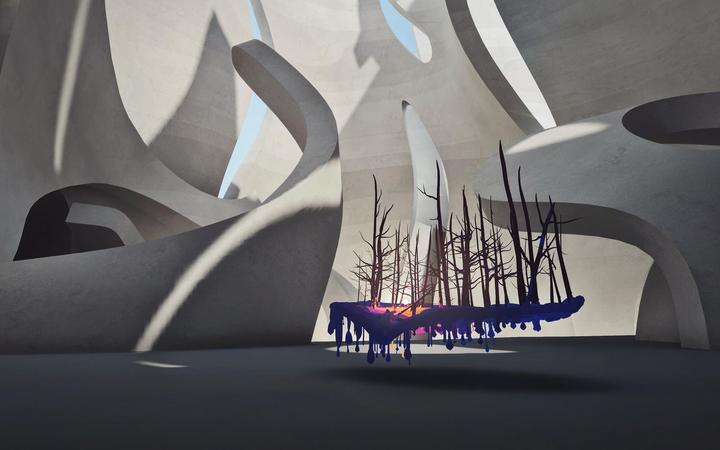 Night Snow: An 'exhibition' in the Museum of Other Realities - a place which exists only in VR. Photo: MOR

The Museum of Other Realities (MOR) is a place curated art people can visit like any other museum - except it exists only in VR.

Robin Stethem is the co-founder and chief executive of the start-up, based in Vancouver, Canada.

"If you were to go to the MOR today, you would see a collection of world class art from artists from all over the world working in VR, presented in its native medium. And so you'd be able to walk around animated floating sculptures and experience jumping down into a landscape painting that's 3-dimensional."

The film festivals were "hosted" in spaces in the museum, alongside regular exhibitions except there were trigger points in certain spaces that would transport the user into a particular story.

"In some cases we would work with the creators to stage a room around their exhibition and there's kind of a pillar of light and if you wave your hand through the pillar it takes you into the experience by that team." 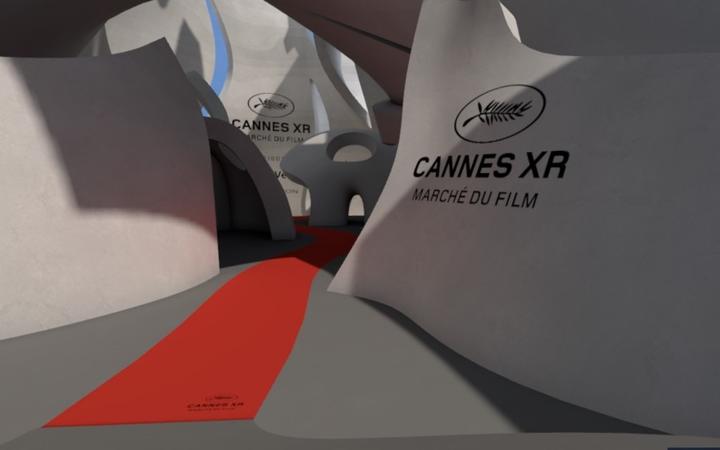 The virtual entrance to the Cannes XR Film Festival in the Museum of Other Realities.  Photo: MOR

Echevarria said although the couple couldn't physically be at festivals, artists were still able to mingle in the VR world, even going to a party in virtual fancy dress.

"The party was starting and I was like 'I'm just going to put on my Mexican wrestler avatar and then I thought, 'I need to go and look at myself in the mirror, maybe I want to change, maybe I want to be a banana today'."

He said the whole process has helped to normalise collaborative remote work. 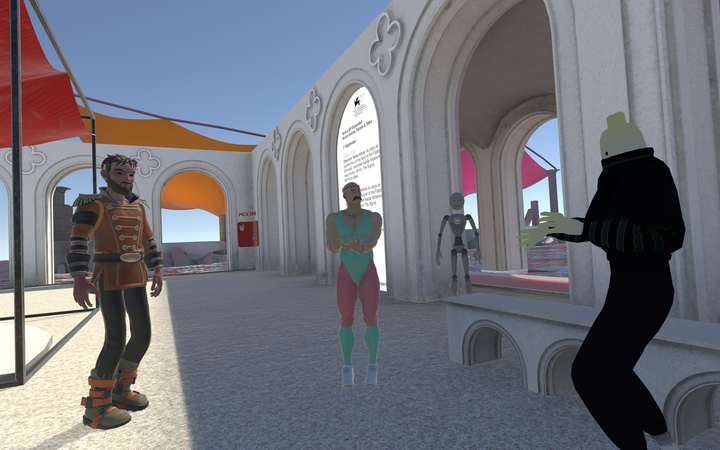 Aretio Echevarria, centre, as a Mexican wrestler avatar for a social event held as part of the virtual film festivals.  Photo: MOR

The couple want to encourage artists to experiment with bold story telling in VR.

Miramar Creative Centre has banded with Kaleidoscope for a grant for New Zealand artists, which they hope will help others projects take flight.

Minimum Mass will play at several virtual film festivals through to the end of the year, including ones based in Paris, Montreal and Denmark.